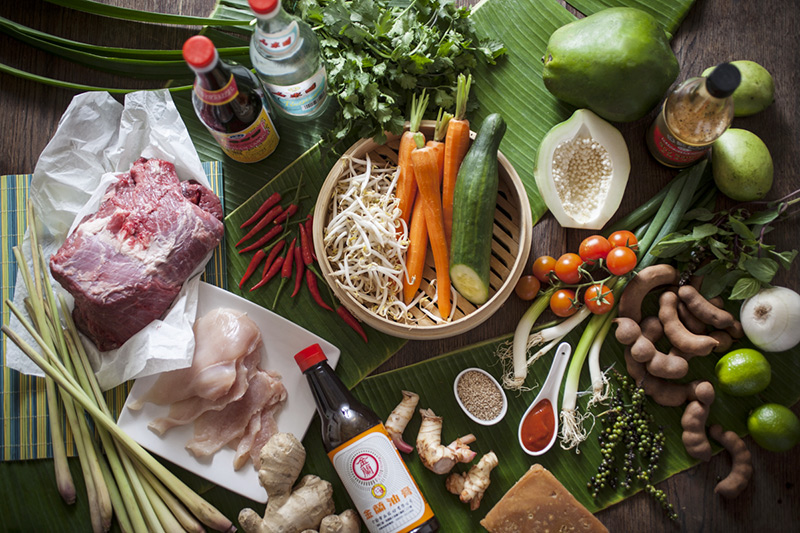 When you think of the cooking of Asia, it surely conjures up many different ideas for different people; Middle Eastern food at one end of the spectrum and Japanese food all the way at the other with a panoply of exciting dishes in between. Asia’s a very large continent and as such encompasses a huge range of foods, spices, cultures and cooking techniques, including grilling and barbecuing techniques that have developed over millennia. In the east of Asia, the most common way of preparing meat and vegetable dishes is by stir frying with the use of a wok or hotplate however, intriguing grilling techniques have evolved in the East as well and can be easily paired with other ways of cooking on your own barbie. 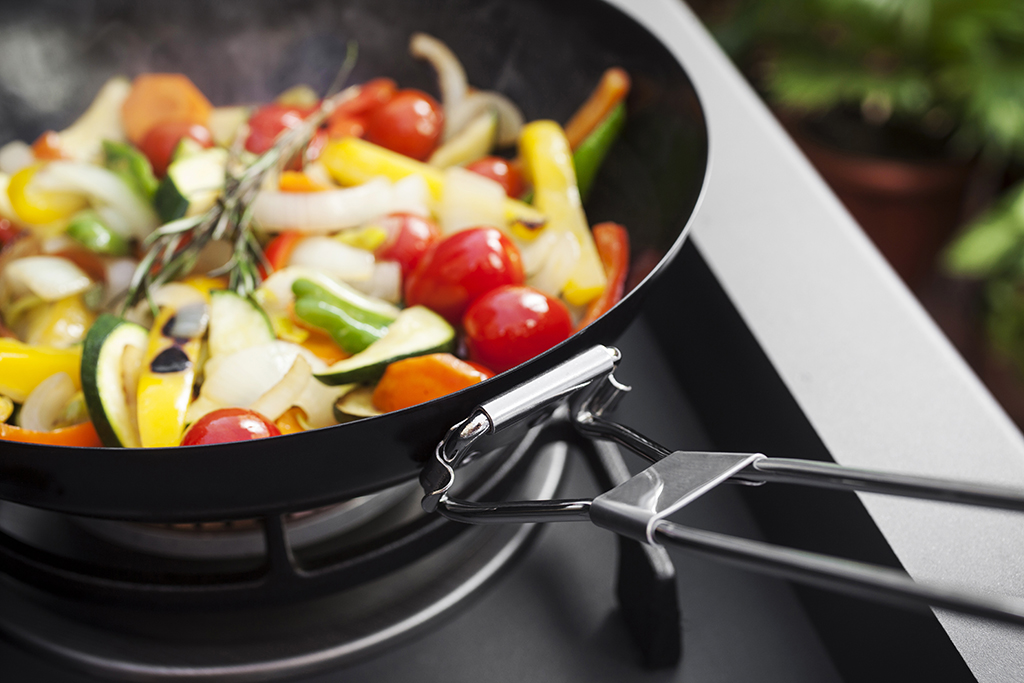 If your barbie comes equipped with a side burner, the BBQXL wok is ideal. Suitable for the grill, side burner or for indoor use; when it comes to stir-fries and more this wok has you covered. Click on the picture for more details!

One thing that is certain is that there’s no barbecuing standard in Asia. Along with all the diverse ingredients and cooking styles, grilling techniques vary widely from country to country. Grilling in the middle east is characterised by large pieces of spiced meats on large metal skewers. India doesn’t grill as much as they do fire roast meats and breads in tandoors, large ceramic urns in which fire burns in the bottom and reaches temperatures near the 480℃ mark. Thailand and Indonesia grill small pieces of meat on bamboo skewers and serve “peanutty” satay sauce to accompany them. 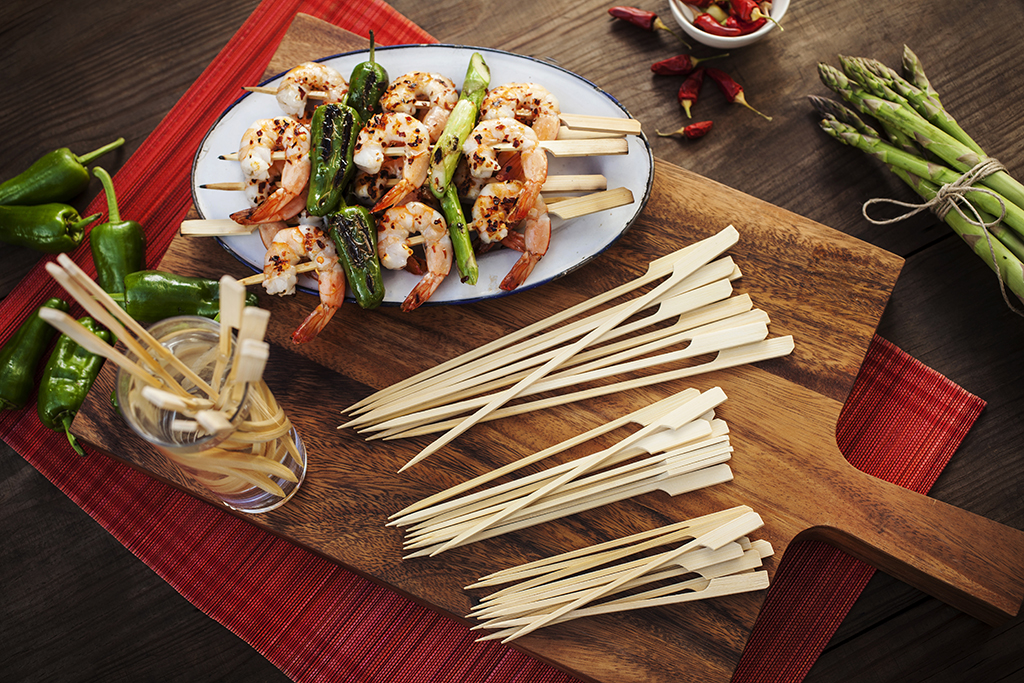 BBQXL bamboo skewers are top of the line and come in various lengths, from 15 to 23 cm. Click on the pic for more details!

Vietnam grills larger pieces of meat, also on bamboo skewers, and serves it with nước mắm, a fish sauce based accompaniment and white rice. Traditional Chinese barbecue, known as Char Siu, involves skewering large, whole pieces of marinated red-dyed pork on long forks and placing them over an open flame. In Chinese and other Asian supermarkets around the world, Char Siu can be seen hanging in the window front. Japanese barbecue, known as Yakiniku, involves bite sized pieces of meat and vegetables. A small grill, a Shichirin, is brought to the table and guests are invited to cook their own meat over the open flame on a hot gridiron. Gogigui, Korean barbecue, is characterised by a variety of meats that are brought to the table and where, similar to the Japanese Yakiniku, guests are invited to cook their meal on the large grill that is built right into the dinner table. Korean barbecue also involves a large range of sides and accompaniments, such as Kimchi. Surprisingly enough, the popular “Mongolian Barbecue” is only a name that was coined in Taipei in the 70’s for a type of stir-fry on a very large hotplate that has no relation to Mongolian cuisine and isn’t actually related to barbecuing at all!

The BBQXL Bamboo Chopping Board and Stainless Steel Tray is ideal for bringing your Asian creations from the kitchen to the barbie. More information awaits, just click on the image! 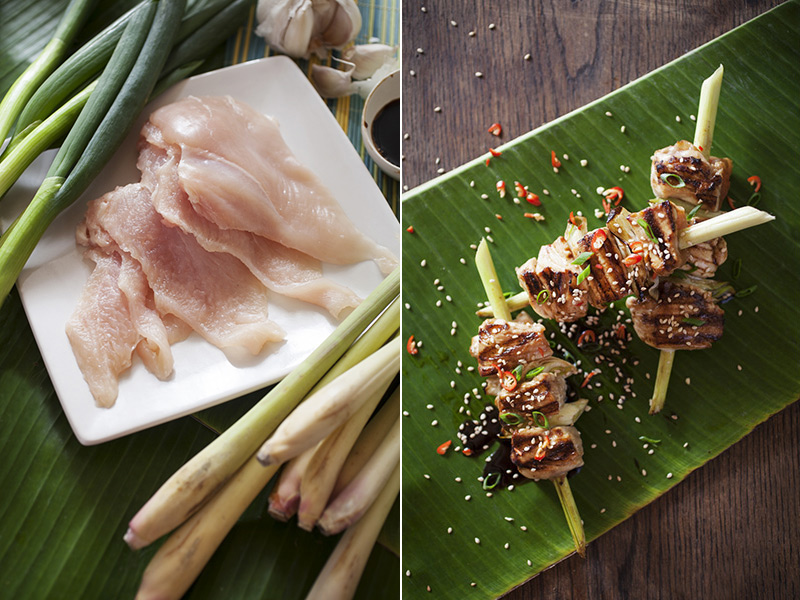 Once you’re done with the chicken on the BBQ and you’re ready to serve, be sure to top it off with toasted sesame seeds, bird’s eye chilies and sauce. Try finding banana leaves to serve for a truly Asian twist. Click on the image for the recipe.

What’s interesting with the world of Asian barbecue is that the foods that are being grilled are often not meant to be consumed directly from the grill but are in fact used as an ingredient in more elaborate preparations. This holds true especially for Chinese Char Siu. Char Siu, mainly pork, is more often than not used for such preparations as Charsiu Bao, a steamed bun that is filled with a variety of ingredients and Char Siu barbecued red pork shoulder or loin. Char Siu is also used in soups, popular to Vietnam. In the middle east, grilled meats and poultry are often consumed as sandwiches, such as Doner and Kebab, after being grilled. They’re also turned into flavourful curries such as the Indian Tikka Masala, Butter Chicken, and other popular Punjabi dishes. 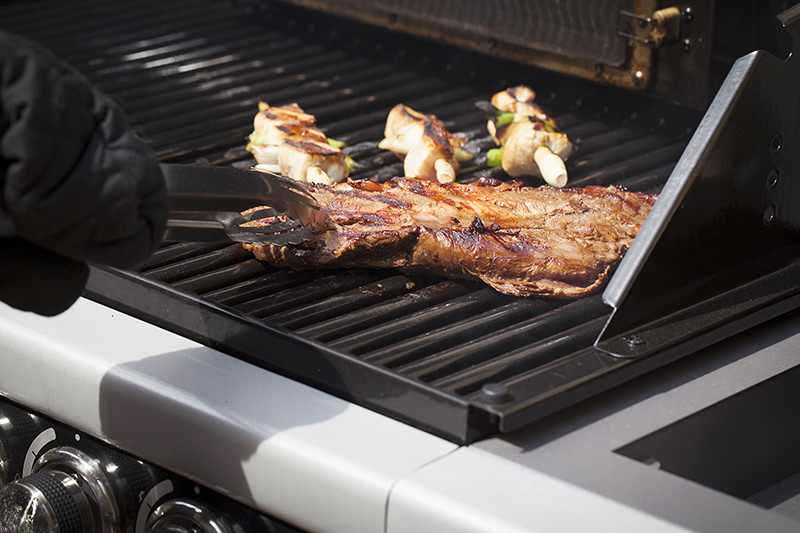 The Flank steak grilled here is perfect for our Thai Spicy Beef Salad, not meant to be eaten as is but sliced thinly and combined with other delectable ingredients for a full-on taste bud sensation! 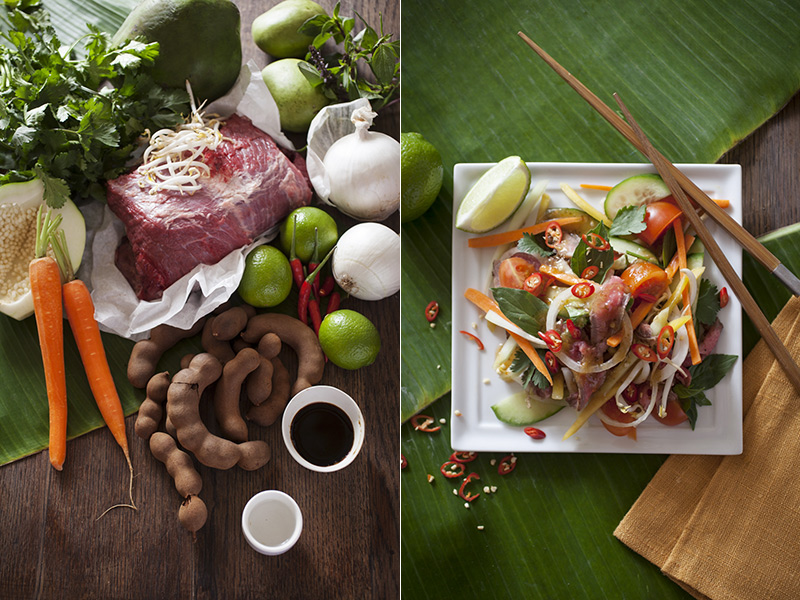 The ingredients for this salad may seem an odd combination to some, but I assure you that there isn’t much that compares to the richness and the refreshing aspect of this dish. Click on the image for more info!

The best thing about Asian cuisine is its’ incredible versatility and the creative allowance it provides for conceiving your own creations using its’ unbelievably vast range of ingredients; from sauces and spices to exotic produce and fermentations. The outdoors is an excellent venue for preparing Asian food on your barbie as you are not limited only to grilling. Stir-frying and steaming on the side burner while your meat, poultry or seafood grills or woking over the open flame with the use of a grilling wok are just a few of the possibilities.

Steaming on the side burner in the BBQXL wok. 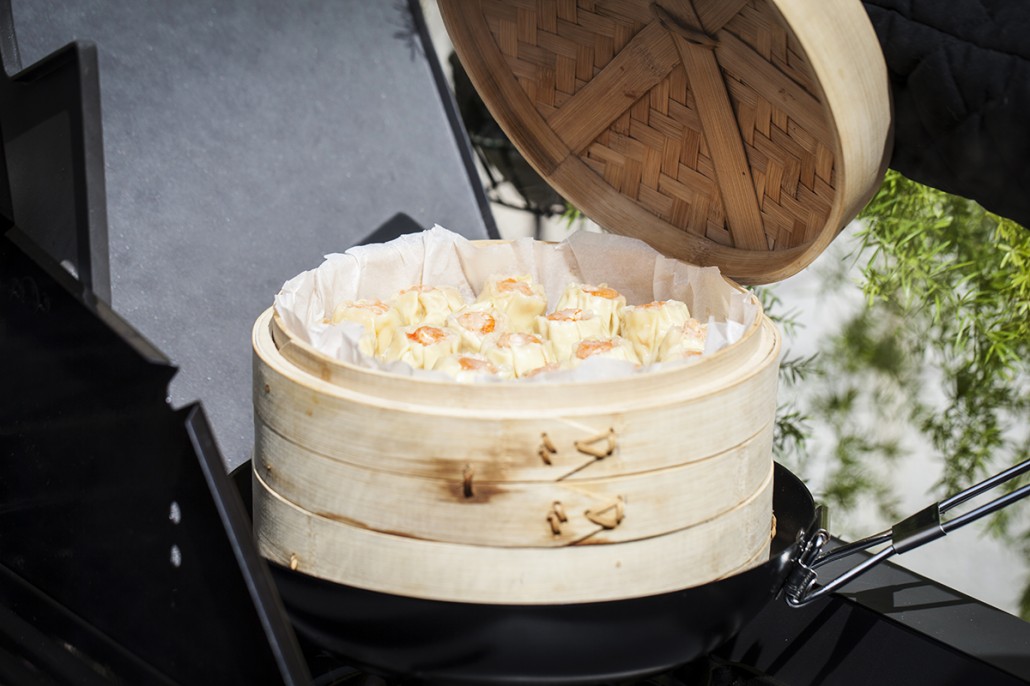 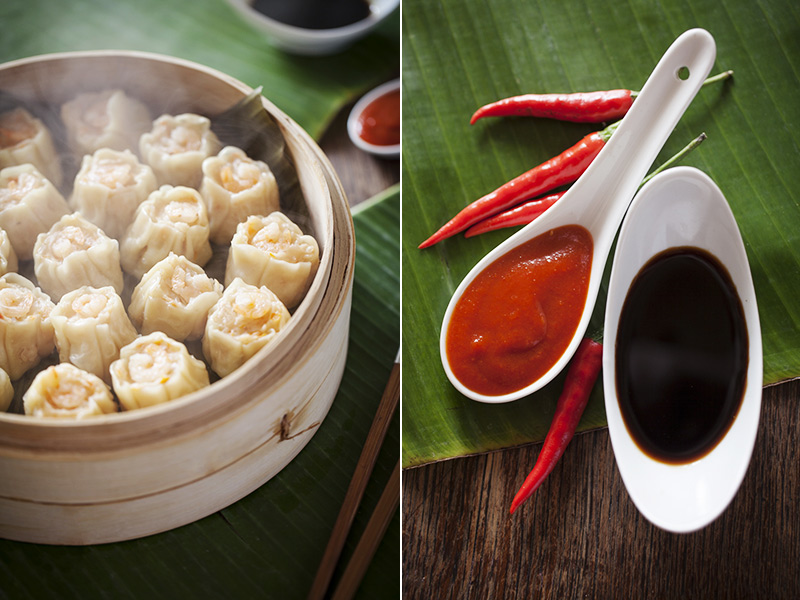 Siu Mai; pork and shrimp dumpling pefectly steamed while everything was grilling. A perfect side to a great barbecued Asian dinner. Click on the picture for the recipe! 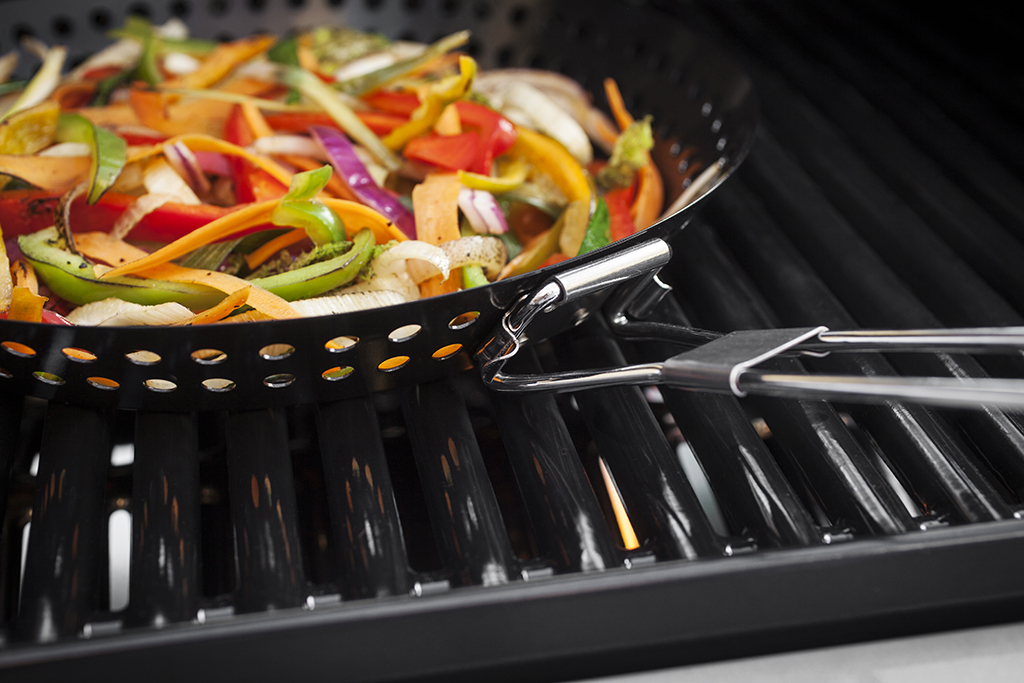 The versatile BBQXL grilling wok is great if your barbie doesn’t have a side burner and you’re looking to diversify your menu!

No matter how you enjoy your barbecue, there’s no debating the fact that Asia has you covered when it comes to flavours and grilling techniques.