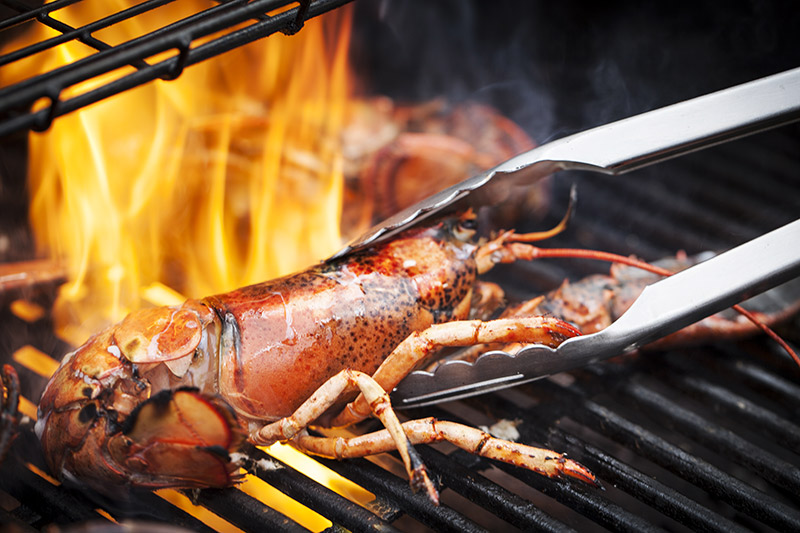 Lobster is a word that has always plagued me because it’s a layman’s term. If you grew up in a warm-water area like those found in Australia or the Caribbean, one may think that lobsters have no claws yet, in cartoons and caricatures they always seem to! Curious!!!

I later learnt that true lobsters are those found in the cold waters of the Northern Hemisphere, like off the coast of Scotland and Norway for example. The Maine Lobster of North-America, a close cousin to the European lobster is fished mostly off the coast of the Canadian Maritime provinces and New-England. What makes these true lobsters, a condition of the varieties of true lobsters found across the globe are their over-sized, meaty and edible claws. The varieties of Rock Lobsters found in the warm waters of the world, such as those found in Australasia, the Mediterranean, South Africa and the Caribbean all belong to their own distinct family yet should not be confused with true lobsters as their name might suggest. Nor should they be confused with fresh-water crayfish, a very close cousin to the true lobster, as the older, more traditional Australian names of “crayfish” “crawfish” or “cray” may suggest when referring to Australia’s rock lobster!

Those fished in Australia, namely the Eastern, Southern, Western and Tropical rock lobsters may share a common background with other crustaceans yet are quite different indeed. Known as Rock Lobsters in Australia, they’re more commonly referred to as Spiny Lobsters in the rest of the world. As this post pertains to true lobsters, the ones with the large claws, this is what we’re going to focus on however, if you can’t find fresh or frozen cold-water lobsters they can be easily substituted with large (600gr), Australian Red Claws or large Murray Crays that are similar in both taste and texture. I’m reserving rock lobsters for another Poseidon’s Bounty post closer to Christmas, where I will be grilling them in a slightly different manner than I’m doing here; bush tucker style! 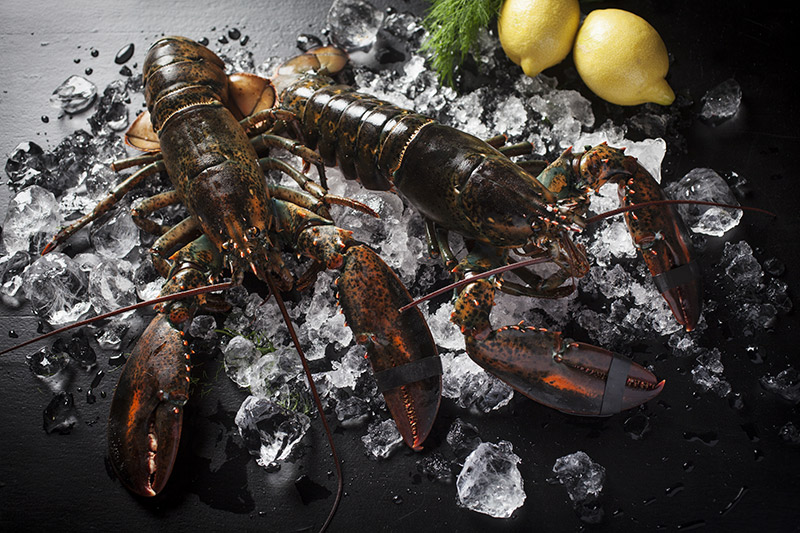 The sweet flavour of the cold-water variety seen above are delectable once they’ve been grilled and require very little seasoning. The cold waters of the north ensure that the flesh is tender as the animals move at a much slower speed and are far less active than the rock lobsters of Australia. Because their diet varies so greatly to that of their warm-water brethren, they are milder in flavour to the rock lobster and can even be considered sweet like the Redclaw or the Murray Cray, therefore a simple, lightly herbed-butter is all that’s needed to enjoy them right off the barbie. 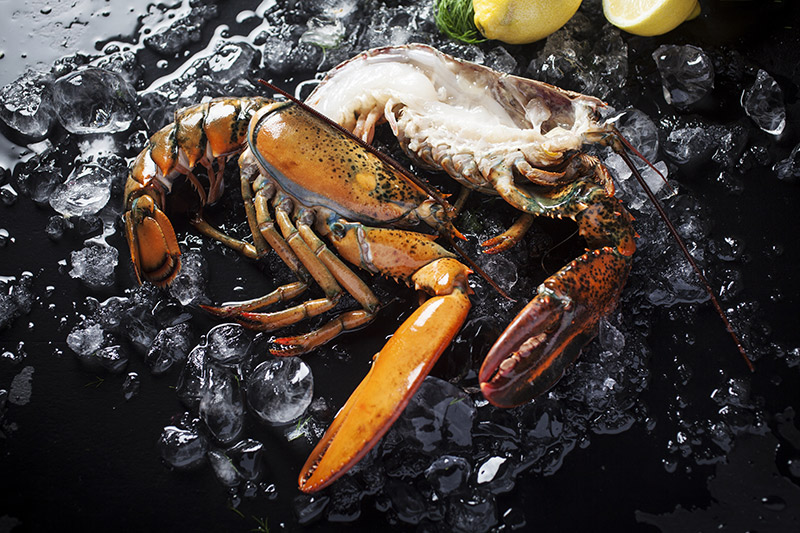 Cold-water lobsters are often sold live throughout the world, in the same manner as the rock lobster or the Redclaw. They can be purchased frozen as well. Live cold-water lobsters always have an elastic band around their claws that should be left on until the animal is ready for cooking. Removing the band while the animal is still alive can lead to injury. Preparation of the animal for the grill is very simple. All that needs to be done is to cut straight down the back, from head to tail and to clean the flesh under running water to remove the roe (eggs, red in colour) and the tomalley (liver, green in colour). Though the roe and the tomalley are considered to be a delicacy by many people, it’s strictly up to you if you choose to leave it in place or rinse it away before placing the lobster on the BBQ. If you are purchasing any live crustacean, such as lobster, crayfish or crab for example, I urge you to click on the following link for the Australian guidelines for humanely killing crustaceans. 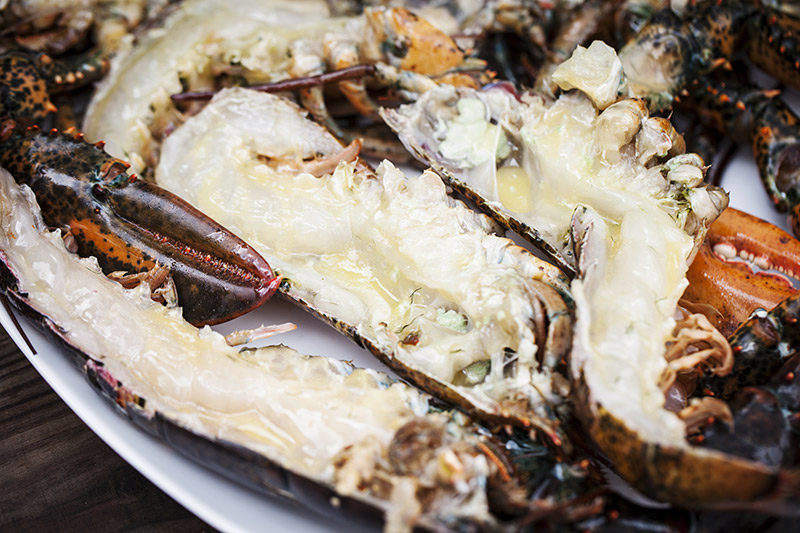 Once the lobsters have been prepped for the grill, brush them lightly with lemon butter. 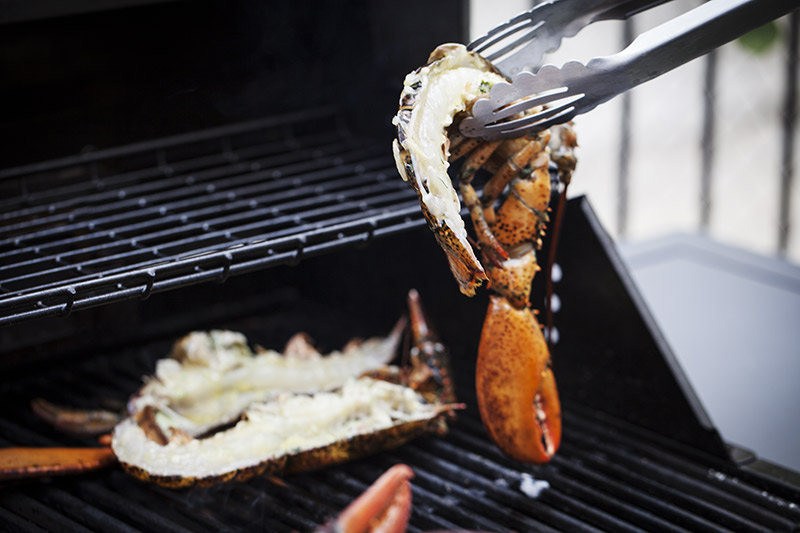 With the grill at medium-high heat, add the lobster halves. Using tongs, place them shell-side down on the grill. If you aren’t already using cast iron grills, which are far superior to stainless steel in my opinion, you can check them out by clicking on the image above! 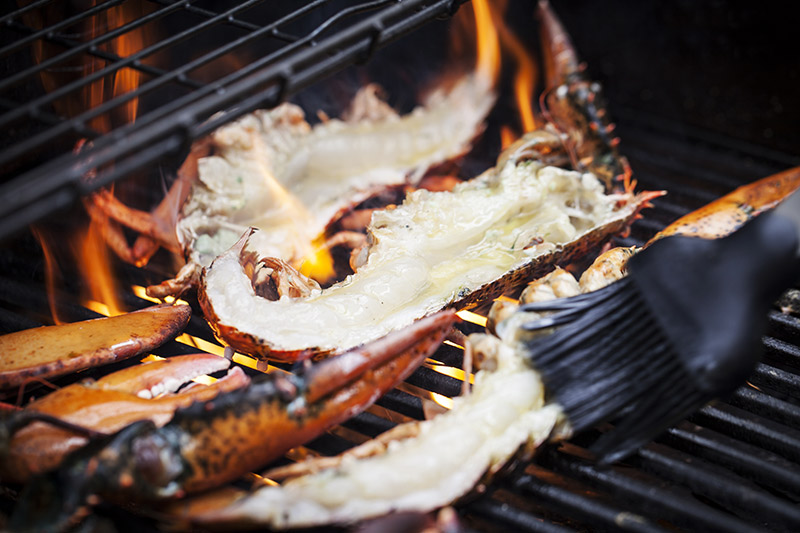 Once all the lobster has been placed on the grill, brush the lobster with the lemon butter once again. Lemon butter is simple to make, simply add 1 tbsp of lemon juice to 3 – 4 tbsp of melted salted-butter. To this you can add anything you like, such as pepper, garlic or herbs though as I mentioned earlier, don’t overdo it as you can easily mask the natural sweetness of the meat. 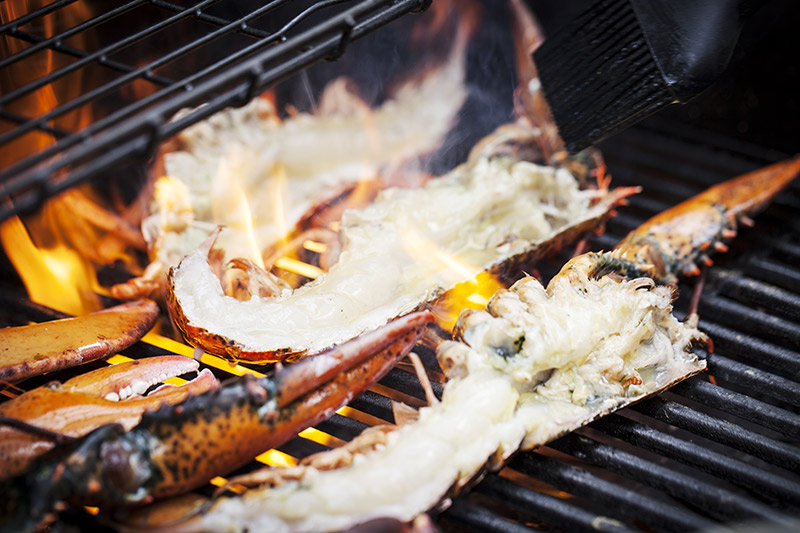 Flare-ups will happen while you’re adding the butter so be sure to wear your protective gloves. In this post, I’m using the BBQXL 4 piece deluxe tool set that includes tongs, spatula, basting brush and wire grill brush. You can check the set out and many more great BBQ accessories by clicking on the picture above. 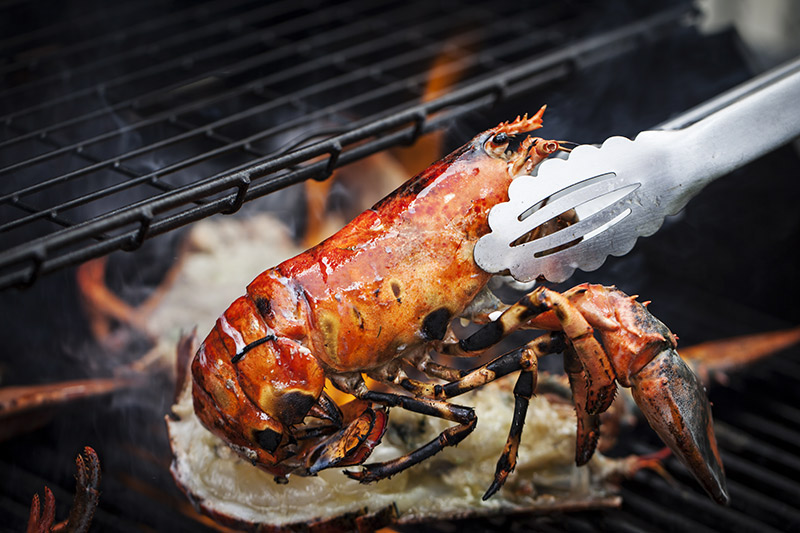 Once the shells have turned bright red and are lightly charred along the edges and legs (anywhere from 6 to 8 minutes depending on the size of the lobster), it’s time to turn them over. Be sure to control your heat as you don’t want to burn them. If you find the heat is too high and the shells are burning, remove the lobster from the grill, turn down the heat and allow the grill to cool for a few minutes before returning the lobster. 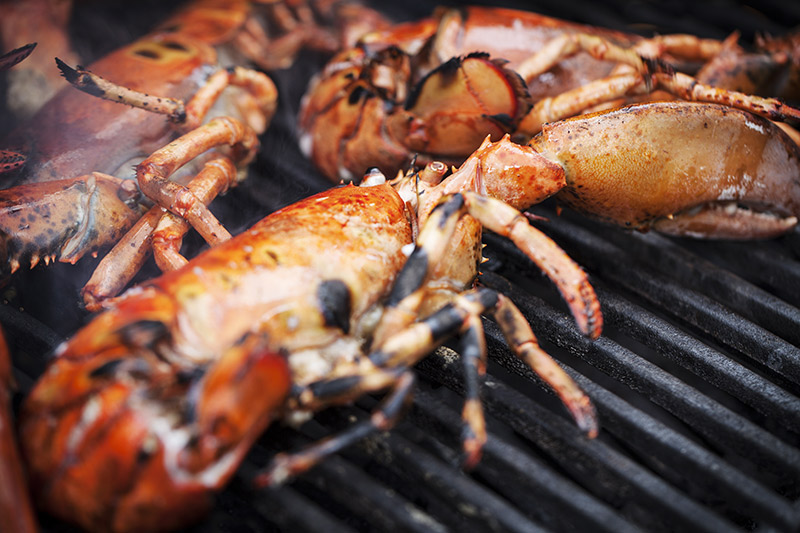 Lower the heat to medium and allow the flesh to cook through fully (another 5-7 minutes). Monitor them and do not allow them to burn but rather to take on light grill lines. At this point, the shells and claws can be brushed with the lemon butter to shine them up and flavour all the nooks and crannies. 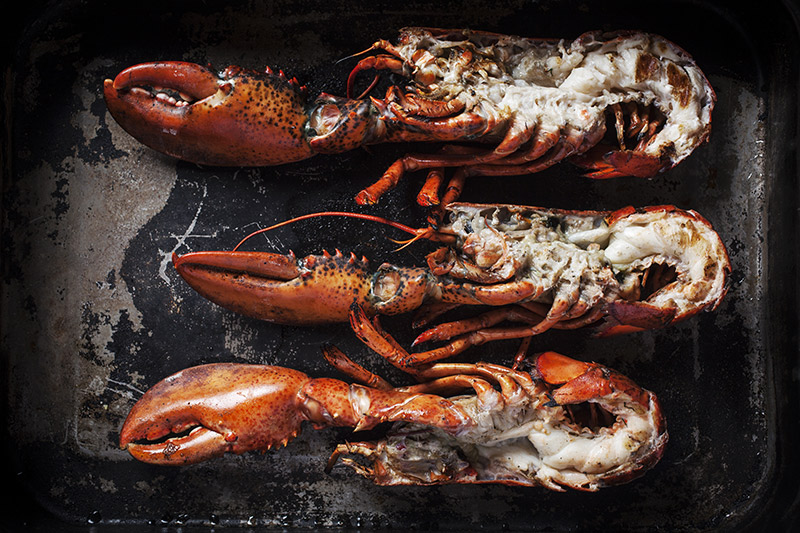 Once the lobsters are done, the shells and claws should be bright red and the flesh should be firm and opaque. 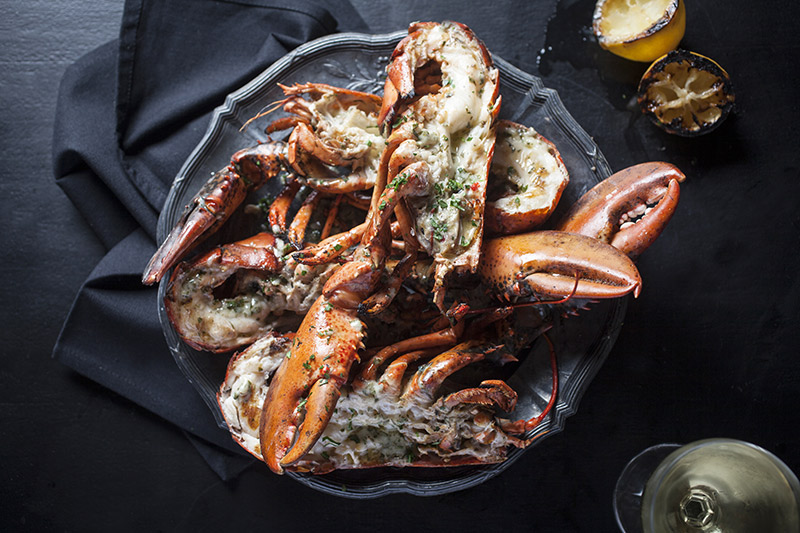 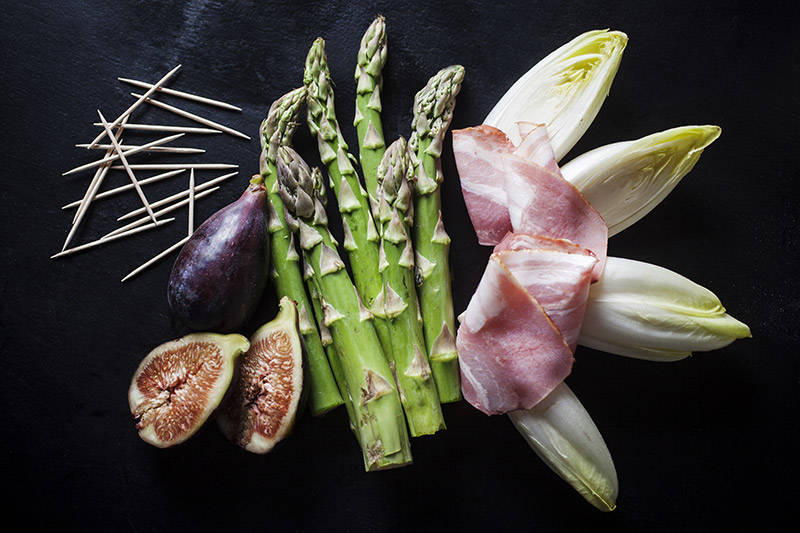 Or accompany them with grilled vegetables wrapped in bacon. Let me show you! 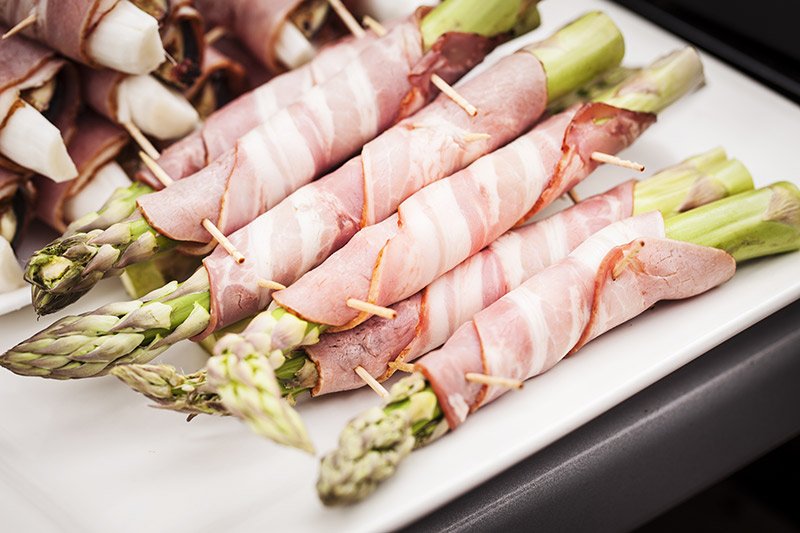 Pick vegetables that are mild in flavour once cooked such as asparagus and endives. 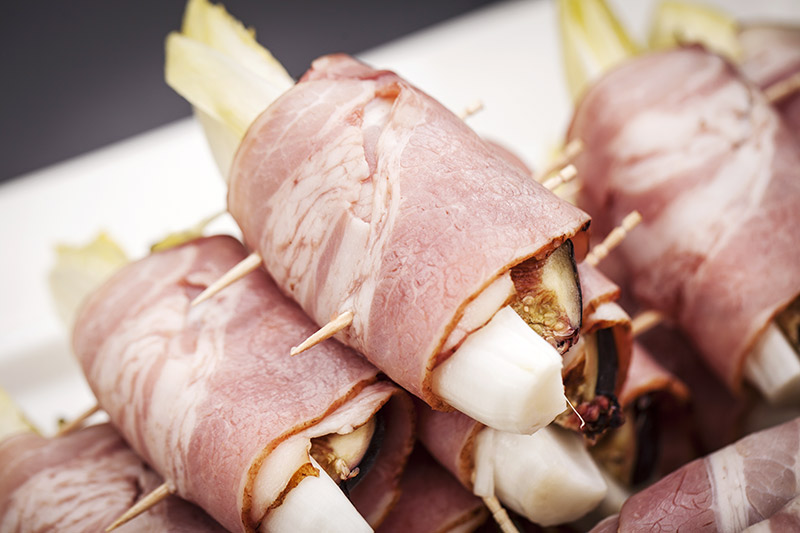 Wrap the bacon around the asparagus and hold it in place with tooth picks. Cut each endive in half, pair it with a quarter of fresh fig, apple or pear, wrap with bacon and secure with tooth picks as well. 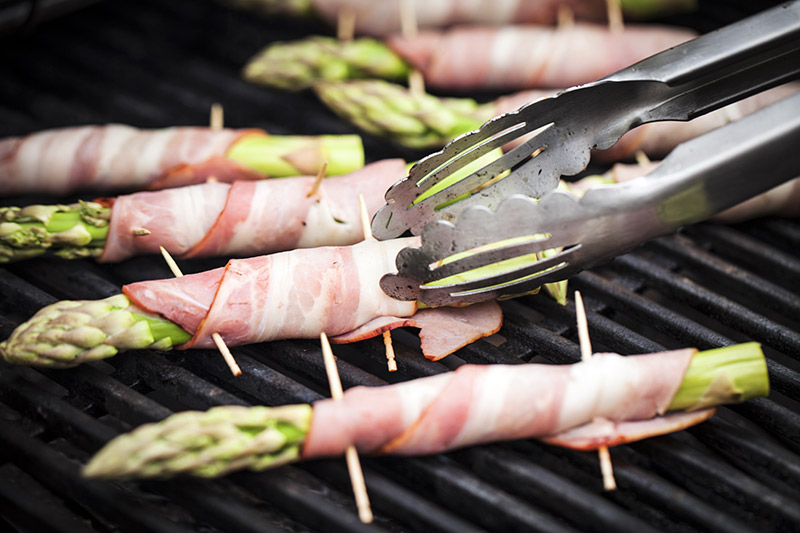 Grill the vegetable/bacon wraps over medium heat once the lobster has been flipped to flesh-side down. 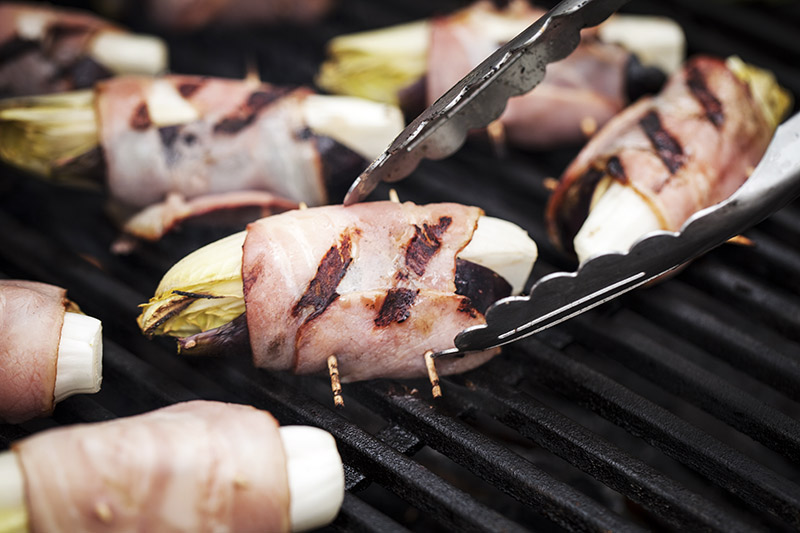 About 2 -3 minutes per side should do it. Make sure that your grill is well oiled to avoid the bacon from sticking and tearing. 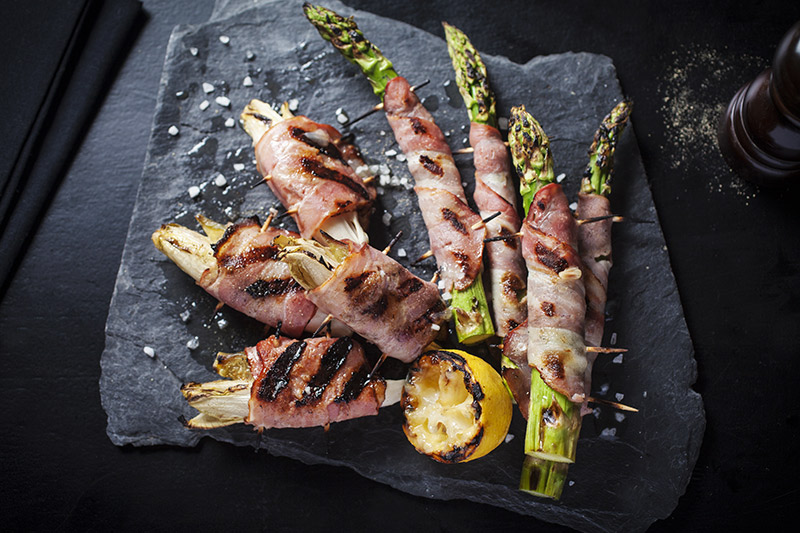 To mirror some of the same flavour as the lobster, sprinkle coarse salt and grilled lemon over top. 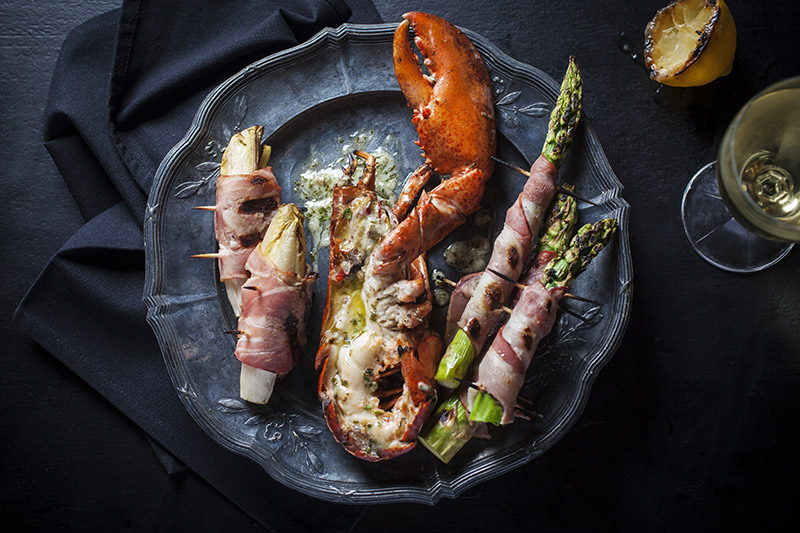 Freshly grilled lobster and grilled vegetable/bacon wraps. A treat that’s sure to please even the most discerning of palates.