RABBIT; FROM A NUISANCE TO A DELIGHT ON OZ’S DINNER TABLES! 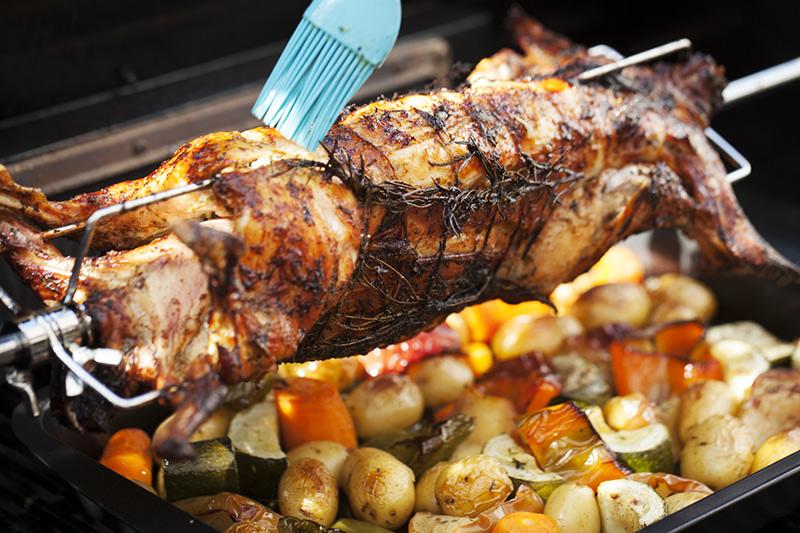 It’s only in the past 5 years or so that rabbit has gained in popularity throughout Australia and has become quite trendy. Though not yet very well-known on the Australian menu, it’s widely consumed in the UK and almost all of Europe and has been for centuries. Rabbit excels when it comes to lean, protein rich white-meat and it’s a breeze to prepare on the barbie. The only thing that you need to be aware of when preparing rabbit is that because it is virtually all white-meat, you don’t want to over cook it or it will be dry, similar to chicken breast or lean pork.

In almost all of our posts on BBQXL, I always give you a glimpse of the fresh ingredients as an introduction to what I’ll be preparing and what you should be buying in order to do the same. That being said, I’m not going to do that in this post. For any of you that have ever purchased a whole rabbit (which you’ll need for this, two in fact), you’ll know that when they’re sold, they have little “bottoms” and they just don’t photograph nicely. I can still remember an anecdote from an aunt of mine who used to work for a huge international fish and seafood conglomerate and who did the marketing and packaging of their products. At one point, the company decided to delve into the delicacy that is frog’s legs. I can still remember the stories around the dinner table, and most notably the laughter as my aunt told the carryings-on at work over these frog’s legs and the awful time the photographer had trying to shoot them. You see, the problem with them is that they’re marketed and sold in pairs and as such, there were little “bottoms” sticking up in all the pictures. They never found a solution and quite frankly neither did we with the rabbit!

That being said, don’t sweat it! Buy two rabbits of about the same size (they’re quite standard) and we’ll continue from there! 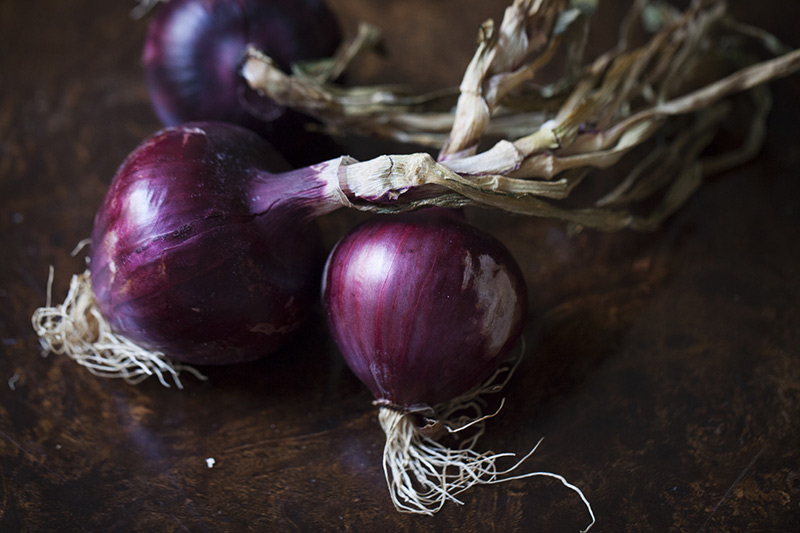 In this method for cooking rabbit on the BBQ, I’ve opted for the rotisserie as you can see in the main picture of this post. This is why it’s important that you buy whole rabbits. Remove any of the organs, rinse the rabbits, remove the heads if need be and pat them completely dry. For this post I used red onions but you can use any kind you like. The onions will be inside the rabbits while they’re cooking, will impart flavour to the meat and will help keep the meat moist. 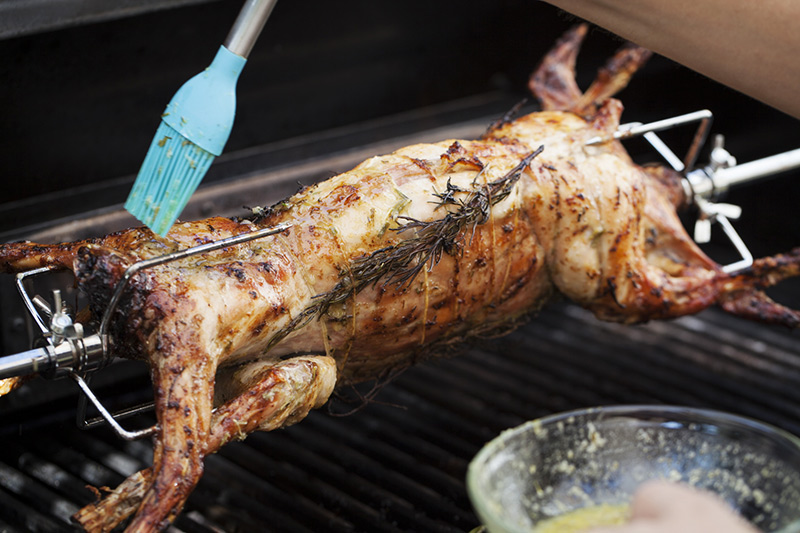 Take at close look at the image above. With the two rabbits head-to-tail, I’ve gone through the necks with the spit and have used the forks to hold them in place at the opposite ends. Inside the cavities, are the onions that have also been skewered onto the spit. To sum it up, it goes, rabbit, onions and then rabbit. Using cotton kitchen string, tie around the whole bundle and slide full sprigs of fresh thyme and rosemary underneath the string. Finish off by using the forks to hold the arms and legs open at either extremity while it roasts. The roasting time should be about an hour and a half at medium heat, about 170C. It may sound complicated but believe me that it’s easy once you begin!  Keep your barbie at medium and make sure that the heat is indirect. The rabbit should be in the centre of the BBQ and heat should only be coming from the extremities and the back (rotisserie burner). If working over coal, part the coals during the initial cooking time and gradually move them back toward the centre of the grill over the hour and a half cooking process. It’s at this point, when it’s a light golden colour, that you should add a tray of vegetables under the rabbit. Click on the image if you don’t already have a rotisserie!

It’s very important to baste the rabbit generously and often to ensure juicy meat, about every 20 minutes. Keep the basting sauce simple and earthy. I used an easy olive oil, garlic, thyme, rosemary and salt mixture, but feel free to go more Asian or Indian with your blend as rabbit’s subtle flavour allows for many variants. The vegetables I used are a mix of zucchini, new potatoes, carrot, capsicum, and apple, simply drizzled with olive oil and a bit of salt. If you don’t already have a great basting brush, click on the image. 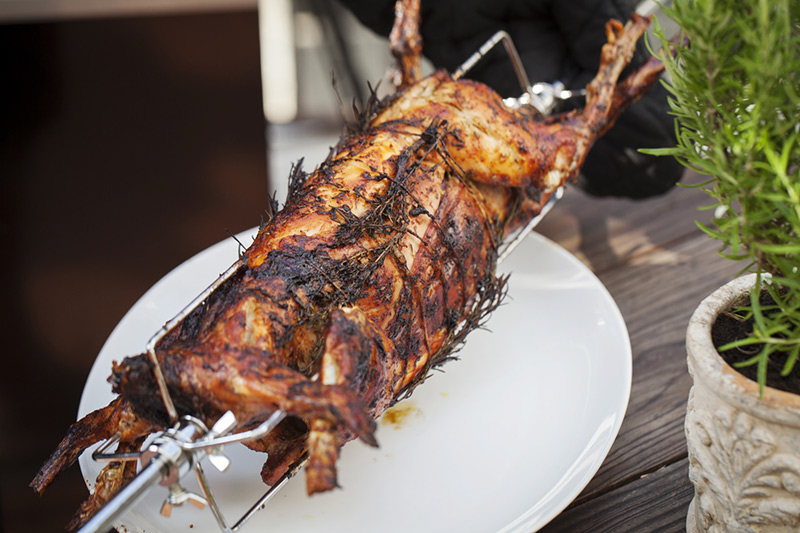 When the rabbit is lightly charred, it’s time to remove it from the rotisserie and allow it to rest for about 5 minutes before removing it from the spit. A good rule of thumb is that when the sprigs of fresh herbs have completely blackened, you’re probably good to go. Pierce a small hole in the fattest part of one thigh and if the juices run clear, it’s ready to be removed from the bbq. 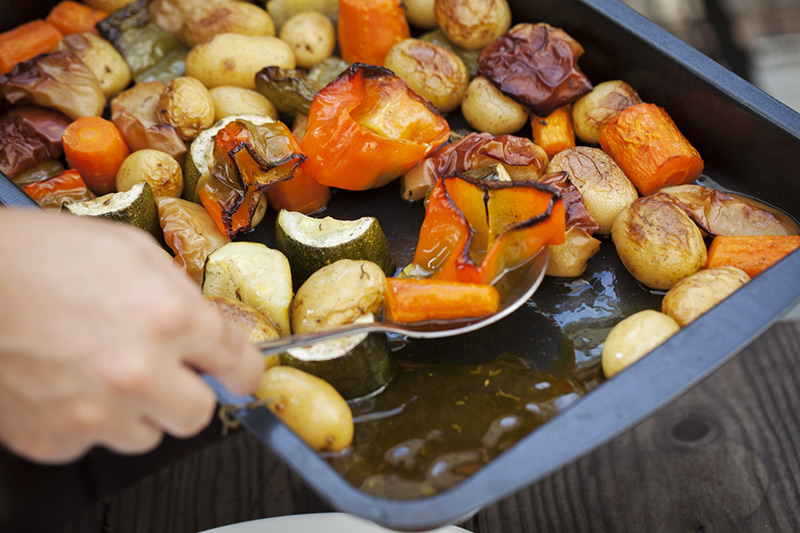 The vegatbles at this point, having cooked over indirect heat yet near to the rotisserie burner will have created a good amount of juice in the bottom of the pan. Do not discard it. We’ll use that in a bit! 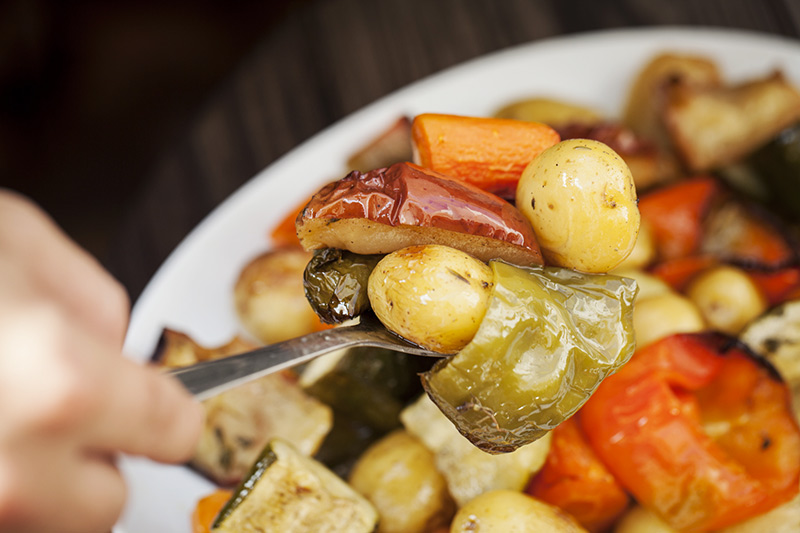 Arrange the vegetables on a plate ready for serving! 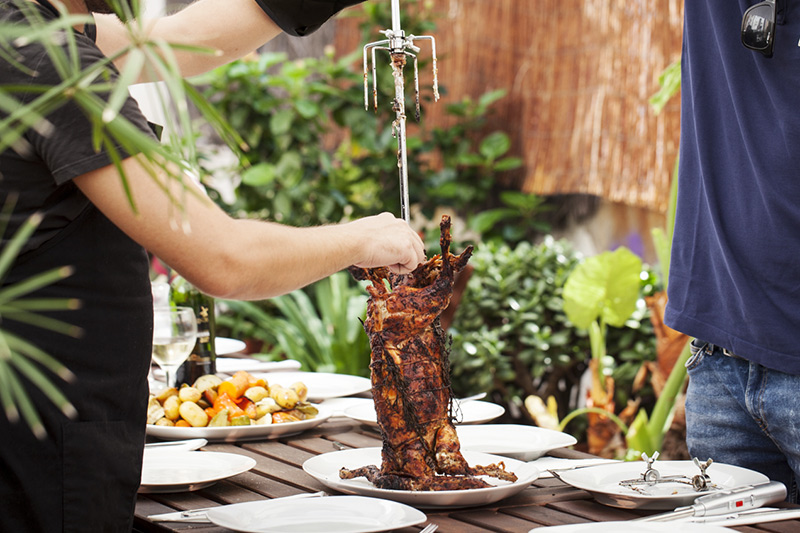 With a bit of help, undo the forks from the bottom end of the spit and slide the rabbits off onto a serving plate. 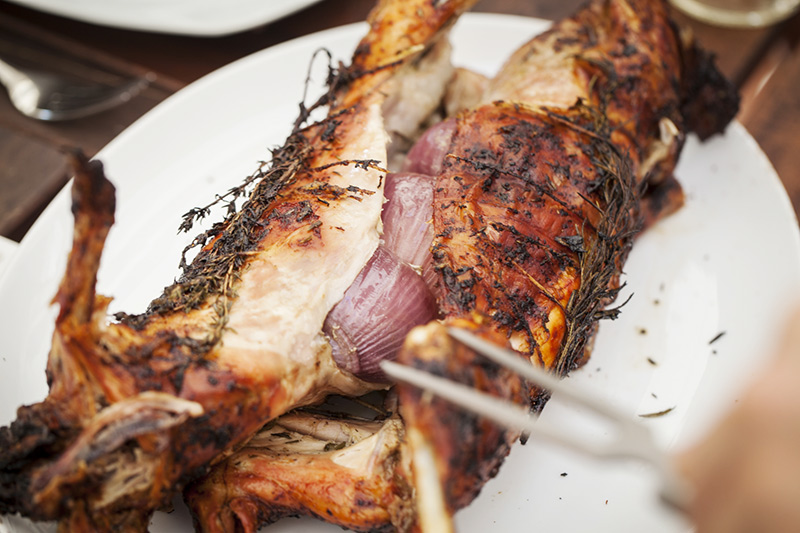 Remove the string from the rabbits and carefully remove the onions. If you’re a fan of onions (and these are sweet and cooked to perfection), you’ll love these! 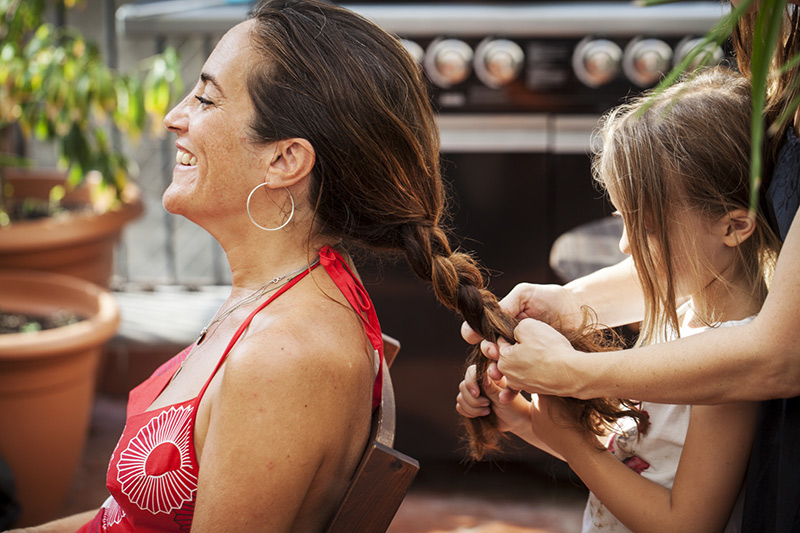 While you and hopefully an assistant are busy doing everything else, this is the kind of thing that should be going on in the background. People enjoying themselves! 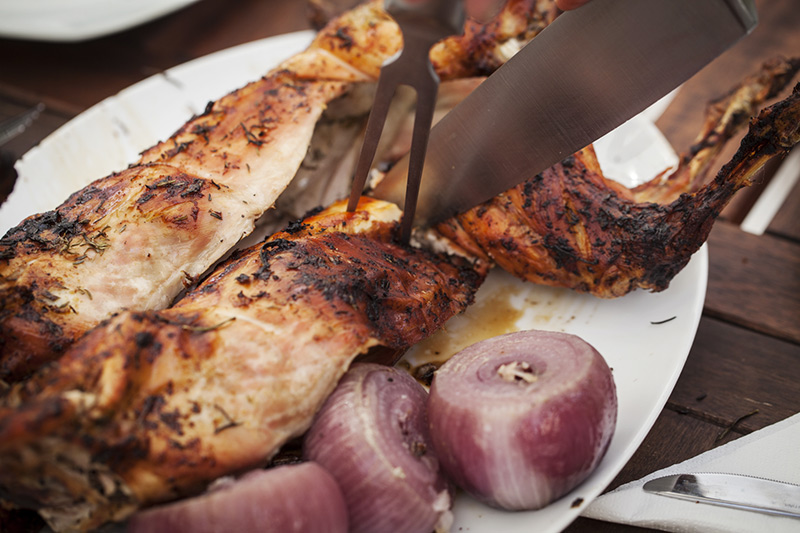 Now back to the rabbit! 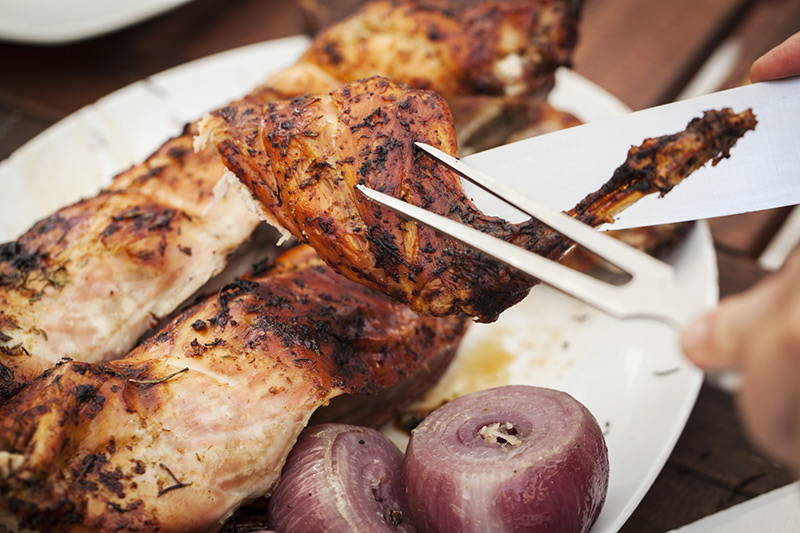 You don’t so much carve rabbit as you do cut it into pieces ready for serving. Begin with the legs, then the arms and cut the rest into manageable sized servings. 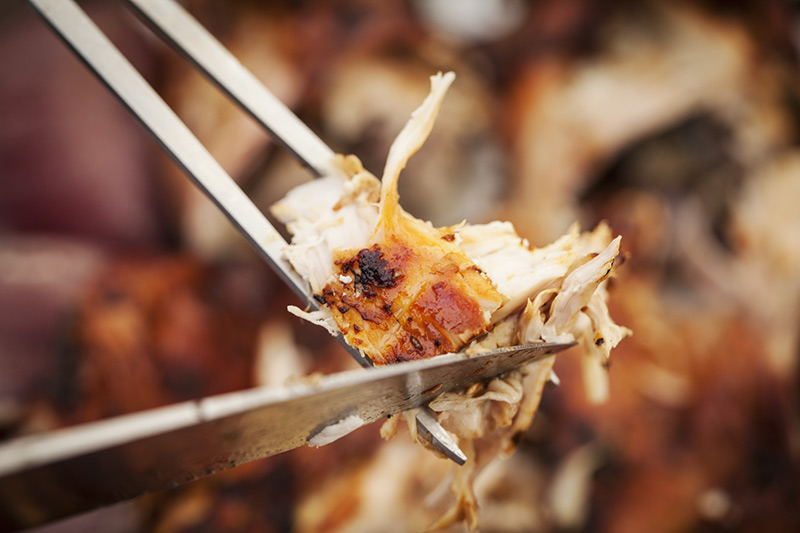 The meat should literally fall off the bones and should be moist; that’s the sign of rabbit that’s been roasted well on the barbie! Remember that yummy sauce in the apple and veggie mixture that cooked under the rabbit that you didn’t through away? Here’s where you’re going to use it. Spoon it over the rabbit. The apple adds just the faintest bit of sweetness that really complements the rabbit perfectly! 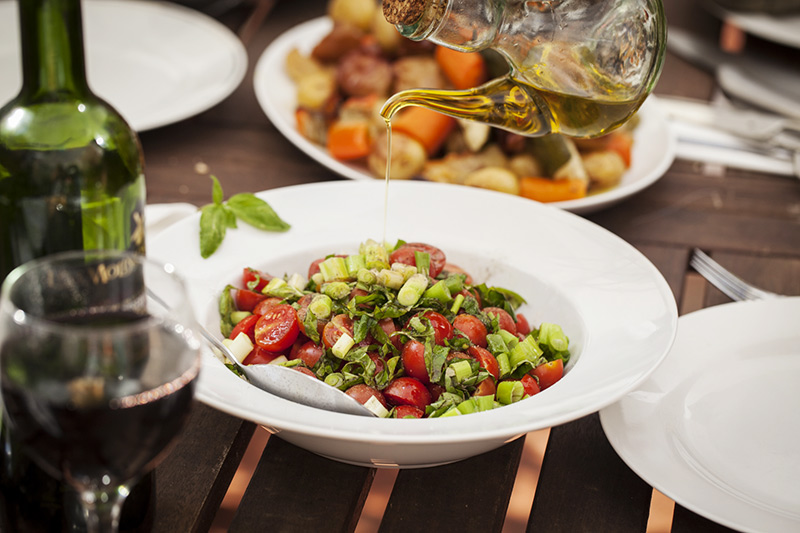 So we have the rabbit and the roast vegetables. Now all we need is something fresh. Keep it simple and keep it light! Cherry tomatoes halved with spring onions, fresh basil, extra virgin olive oil and salt and pepper to taste. Easy breezy! 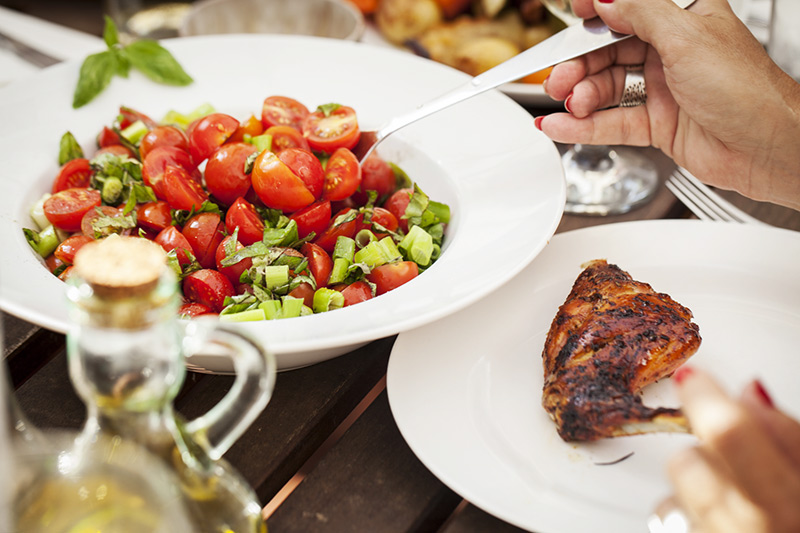 I can guarantee you that your guests will come back for seconds! Simply delicious and plenty for about 6 people!