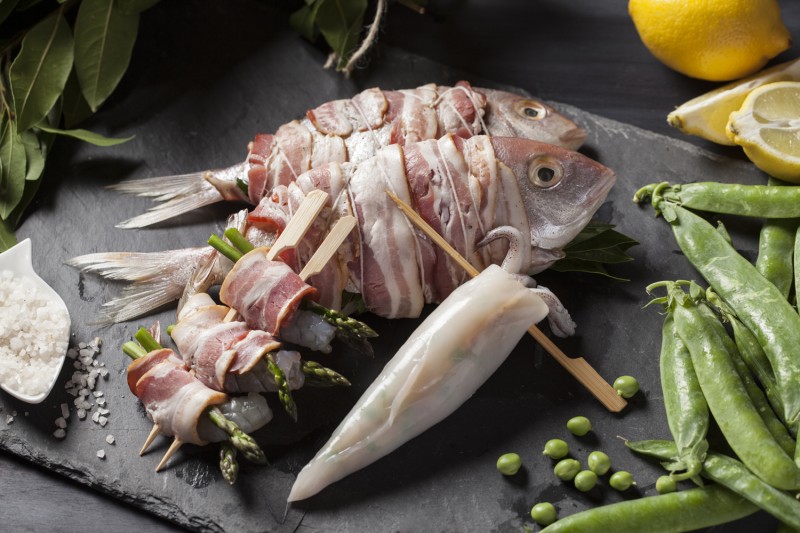 As we all know, fish and seafood can be prepared in a multitude of ways. Stewed, baked, battered and fried, pickled and the list goes on and on. In my personal opinion however, nothing beats fresh fish and seafood grilled on the barbie!

In this, our 4th entry in the Poseidon Bounty Series where we delve into fish and seafood on the grill, we’re going to look at how to marry two of many people’s favourite things; the subtle flavour of fish and seafood and the robust, smokey flavour of bacon. 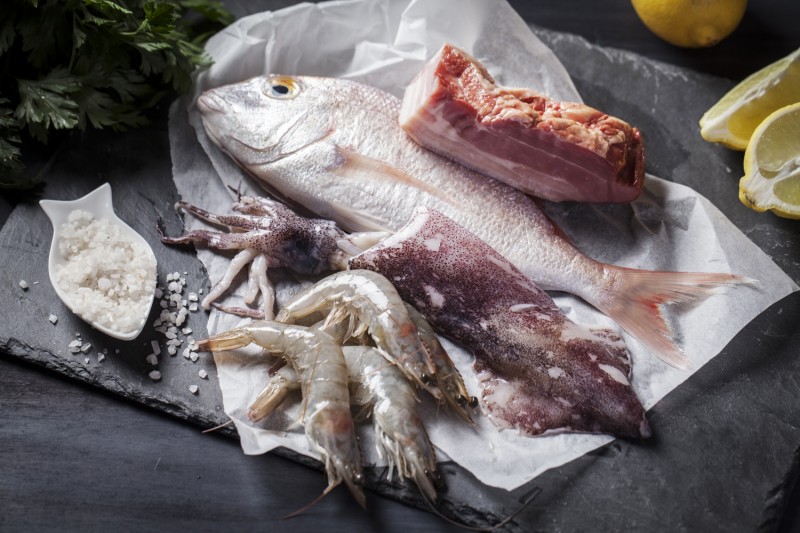 Here’s what you’ll need. Any sea bream or snapper (about 20 to 22 cm long from mouth to tail), large fresh prawns (26-30 caliber) and Loligo squid (also known as Hawkesbury squid/calamari), and the catalyst to this post, smoked bacon. Plan on 4 bacon rashers per fish, 1/2 rasher per prawn and 2-3 per squid. 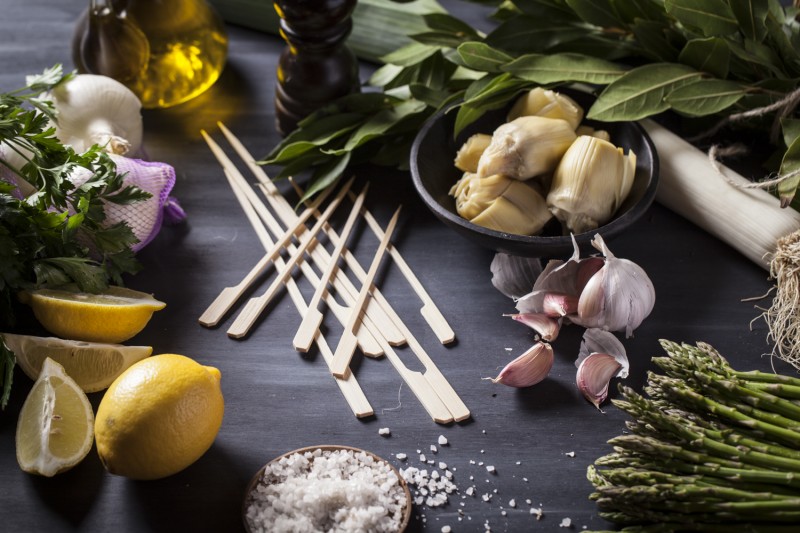 Above are the rest of the ingredients you’ll need. Asparagus, green peas, jarred artichoke hearts, fresh bay leaves (or dried if you can’t find fresh), flat-leaf parsley, lemons, leek, onions, garlic, extra virgin olive oil, salt and pepper. You’ll also need two sizes of bamboo skewers that have been soaked prior to grilling, 15 and 23 cm. Click on the image to view the skewers in the BBQXL online store.

Here’s what you’ll finish up with, ready for the grill. Snapper stuffed with bay, parsley, lemon and onion, wrapped in bacon and tied-off with string. Prawns and asparagus wrapped in bacon and calamari stuffed stuffed with bacon, leek and green peas. You’ll notice that the calamari in this image looks quite different from the purple one in the image above though they are one in the same. One has been cleaned however. Unlike prawns and fish, cleaning calamari isn’t really common knowledge and if you can’t get fresh and have them cleaned at the fish monger, you may have to do it yourself if you’re using frozen. Let’s take a look below at cleaning these slippery guys before we move on to the grill! 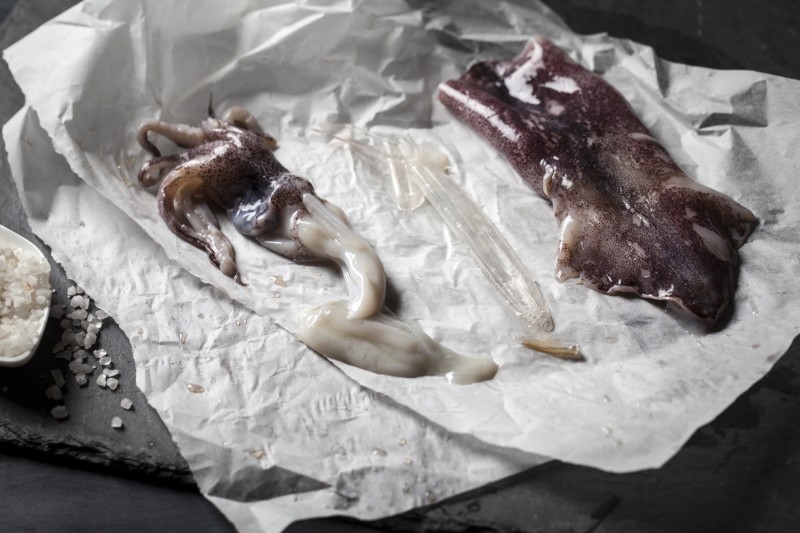 Begin by removing the tentacles and internal organs from the sheath and set aside. Simply pull them apart. Inside the sheath, there’s a long pice of cartilage that looks like plastic (in the centre of this image). This needs to be removed as well. 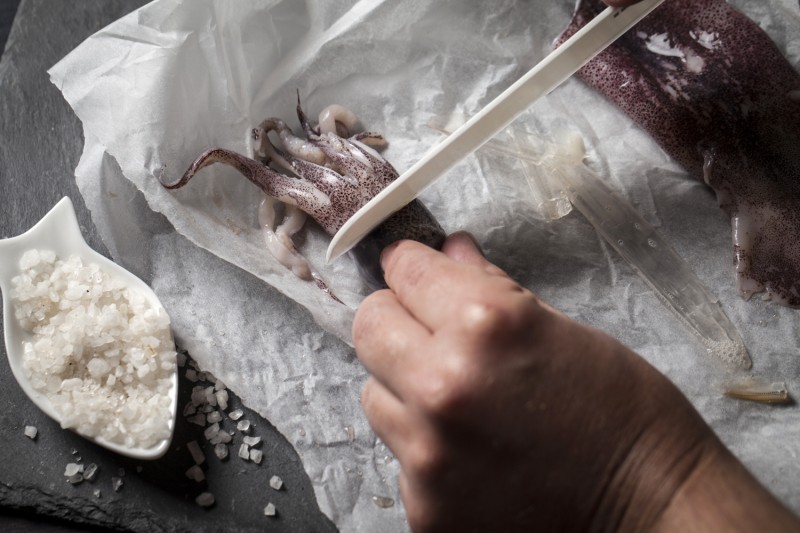 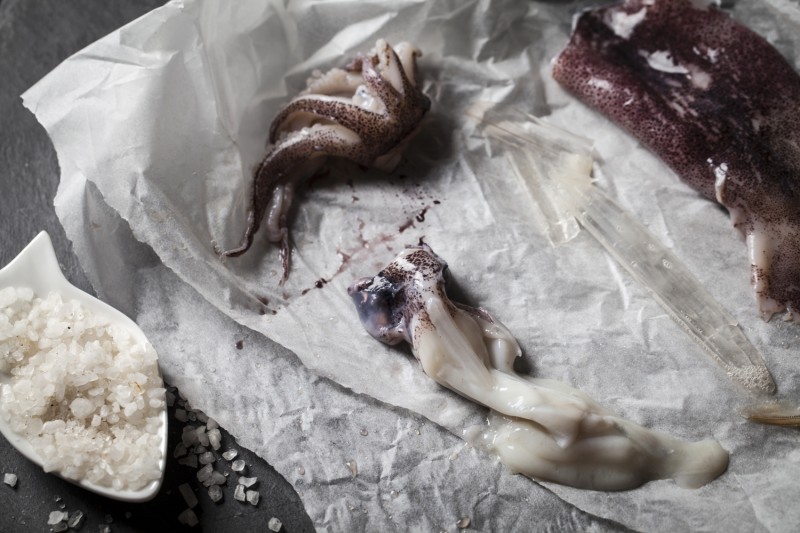 You should now have 4 distinct pieces, the tentacles, the organs (and eyes), the cartilage and the sheath. The organs and cartilage can be set aside for the rubbish/compost bin. 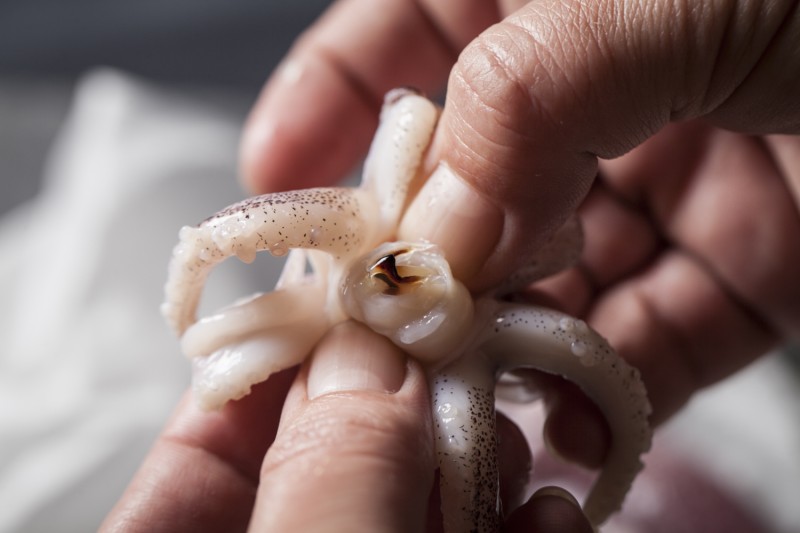 Next, we have to remove the beak. Invert the tentacles to reveal the beak and pressing firmly with your thumbs, the beak will pop out all by itself. 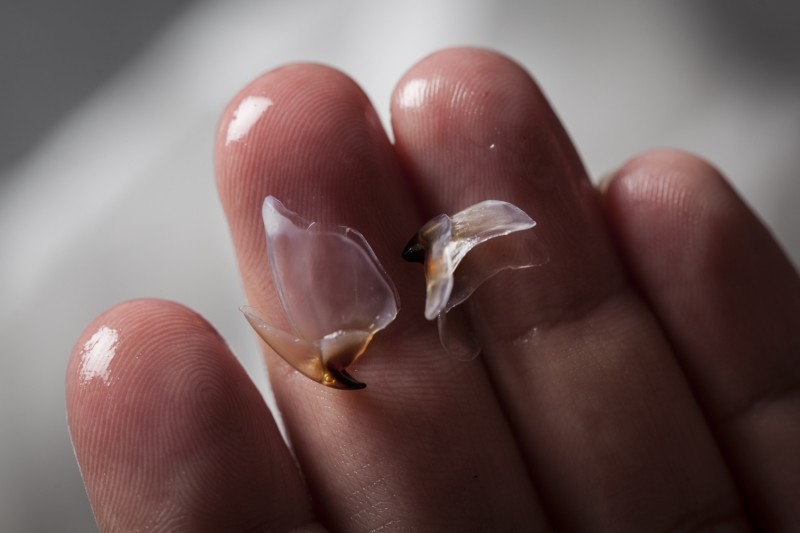 Here’s what should have popped out; the two pieces that make up the cartilage beak. 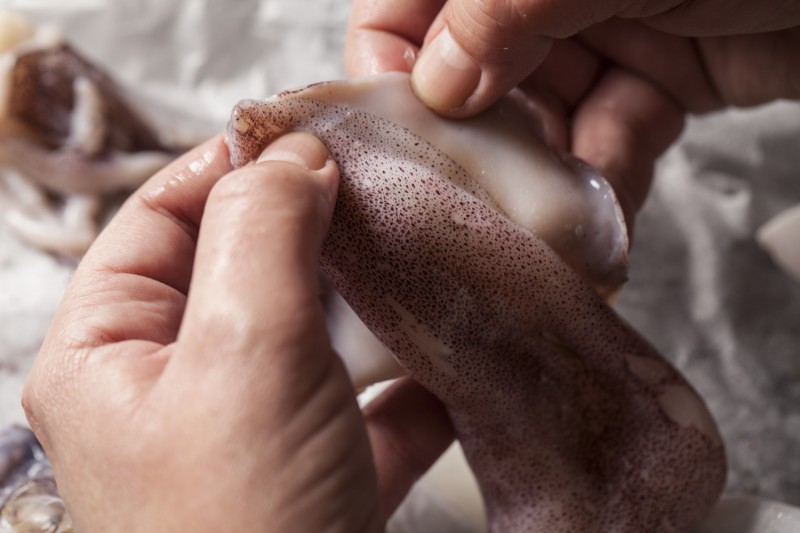 Now for preparing and skinning the sheath. Begin by identifying the fins, there are two. Once you find them, you have a choice, you can either choose to leave them on or discard them. I prefer discarding them in order to create a perfect tube for stuffing. 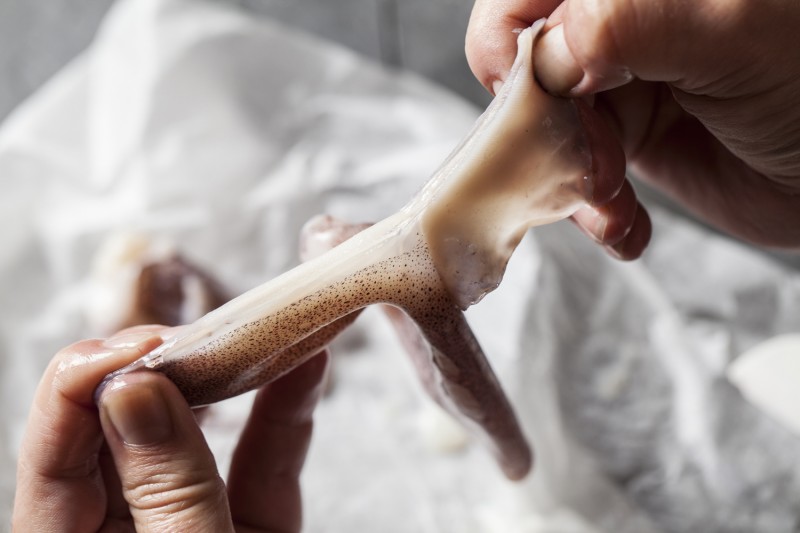 Simply tear the fins downward from the tip of the sheath and place them on the pile for the bin! 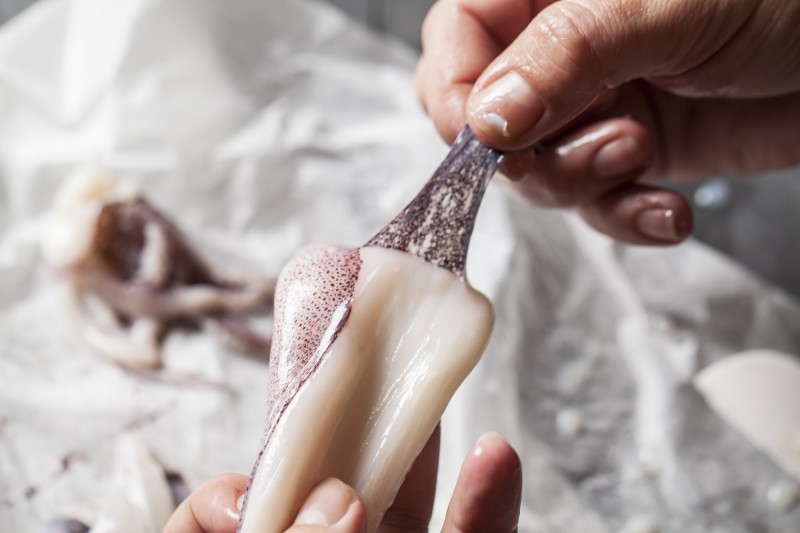 After having removed the fins, you’ll be able to remove the skin from the sheath with ease. Discard it. 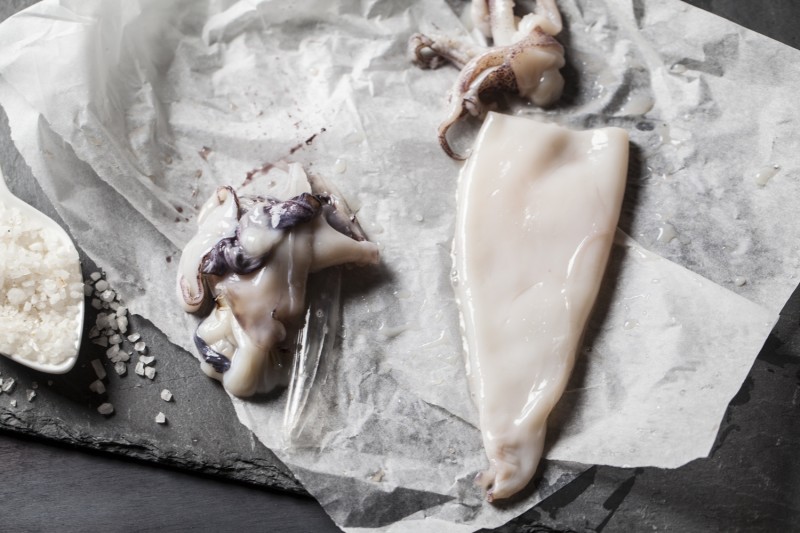 Once you’re done, you can discard the waste that you removed from the calamari (to the left of the image) and rinse off the sheath and tentacles. It’s now ready to be stuffed and closed up with a skewer! 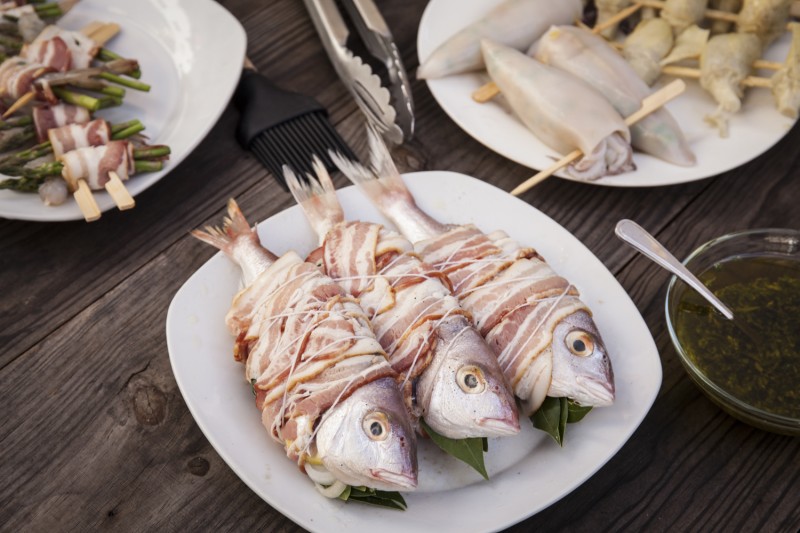 Now that you have everything ready, it’s time to start grilling. Preheat your barbecue to medium high heat and grease your grill thoroughly with extra virgin olive oil. 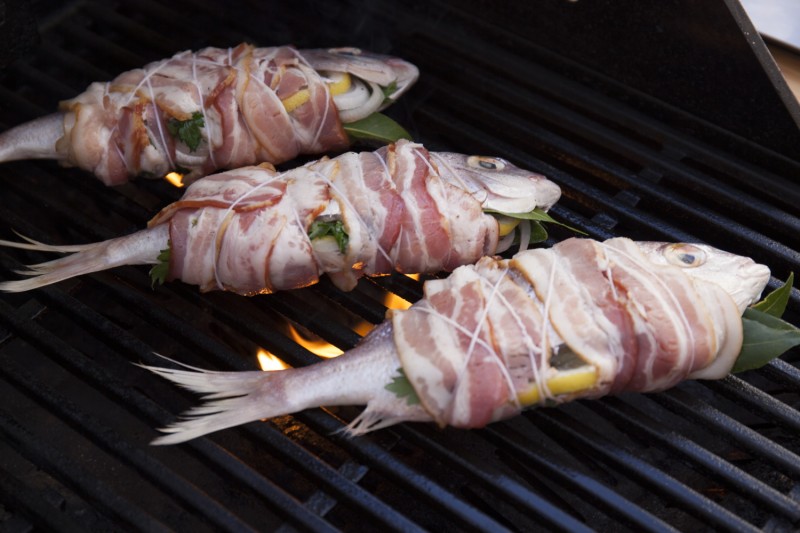 Beginning with the fish, over direct heat, grill them on either side for about 6-7 minutes or until the bacon crisps. Flareups are normal because of the bacon however, try to keep them to a minimum by moving the fish when they occur otherwise your string may burn and break causing everything to unravel. 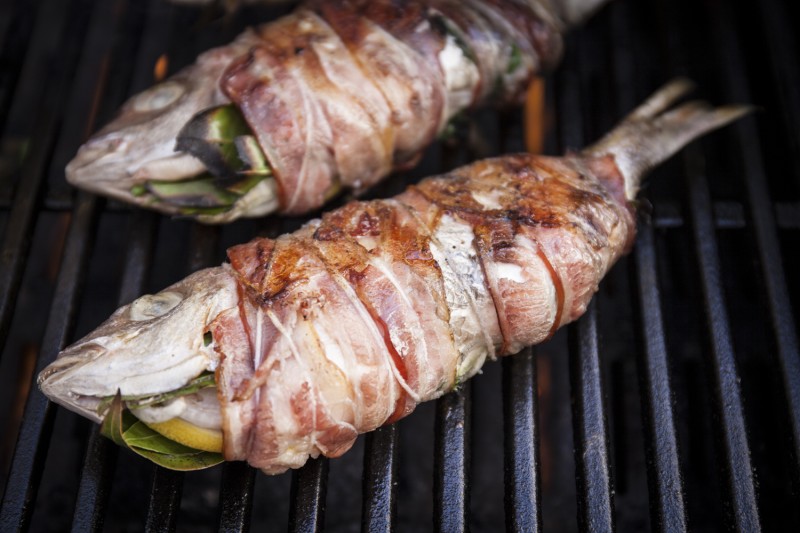 Once both side are done, remove the fish from the direct heat and move them to a cooler part of the barbie while the calamari, prawns and artichoke hearts grill. 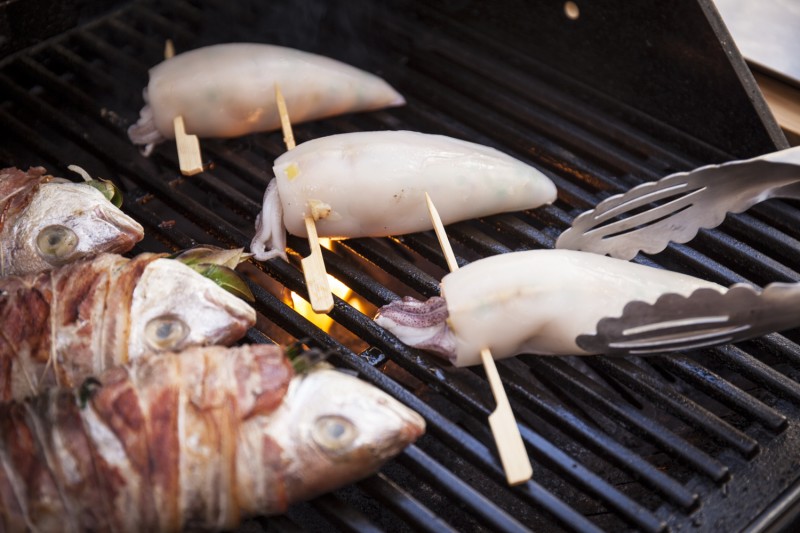 Next come the calamari! 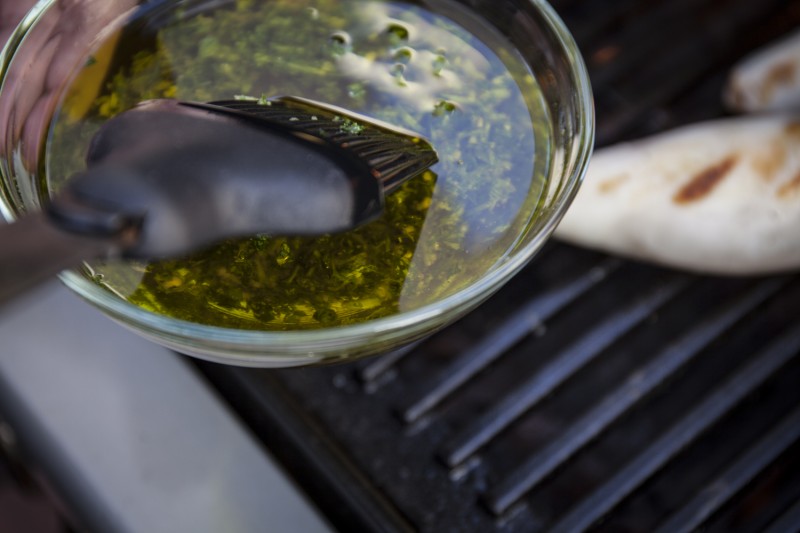 The basting sauce is simple and tasty and will create great flareups that will help season the otherwise tasteless calamari meat. All you need is extra virgin olive oil, flat-leaf parsley, crushed garlic and sea salt. Click on the image for the BBQXL deluxe 4 pice tool set. 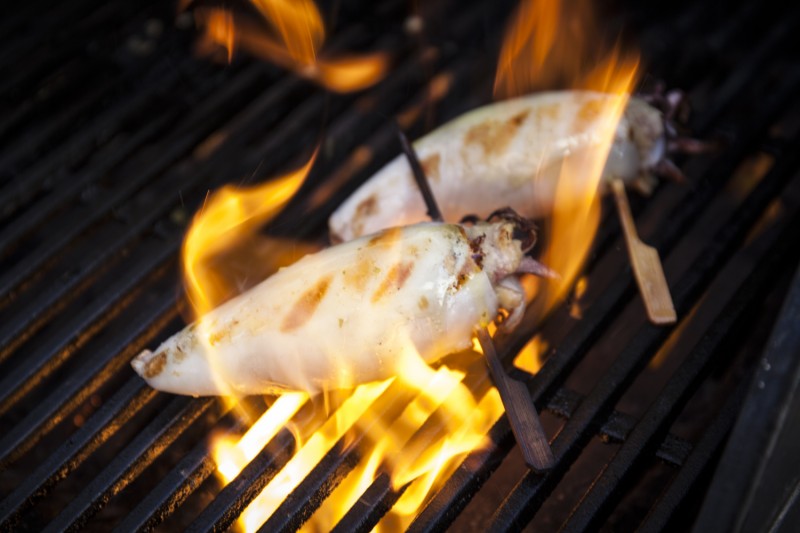 Here are those flareups I was talking about. Just watch that you only char the bamboo skewers though, don’t allow them to burn through. The calamari should only require about 4 to 5 minutes per side in order to cook the stuffing thoroughly. 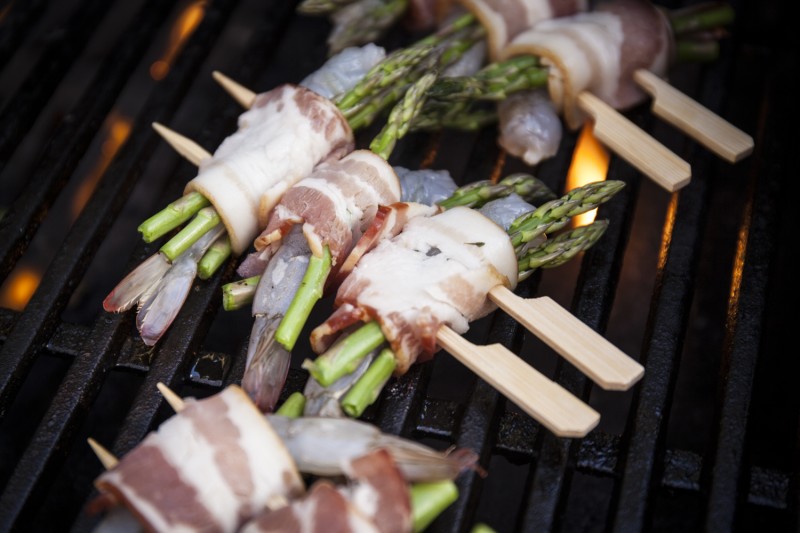 Move the calamari over to the cooler part of the grill where the fish are keeping warm and grill the prawns. The prawns cook quickly and are done when the bacon starts to char nicely. 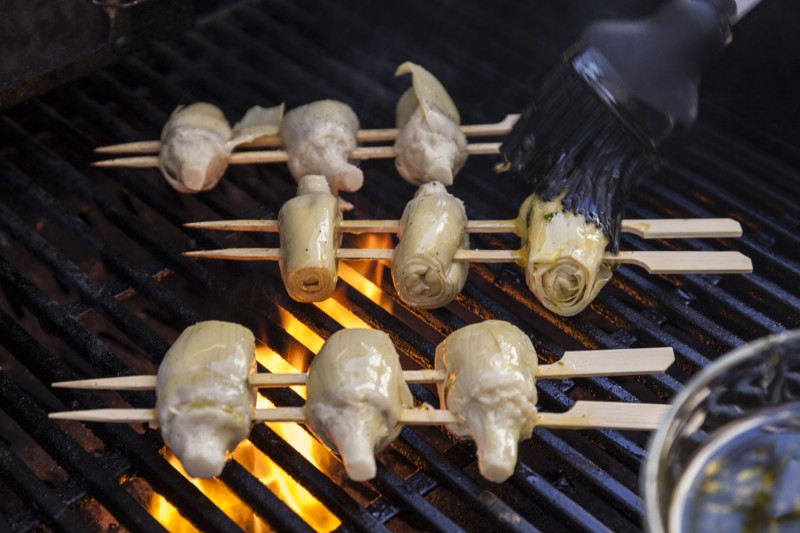 Finally, grill the artichoke hearts and baste them occasionally with the herbed oil from before. Grill until you have nice grill lines and they are warmed through. These don’t need to be hot! 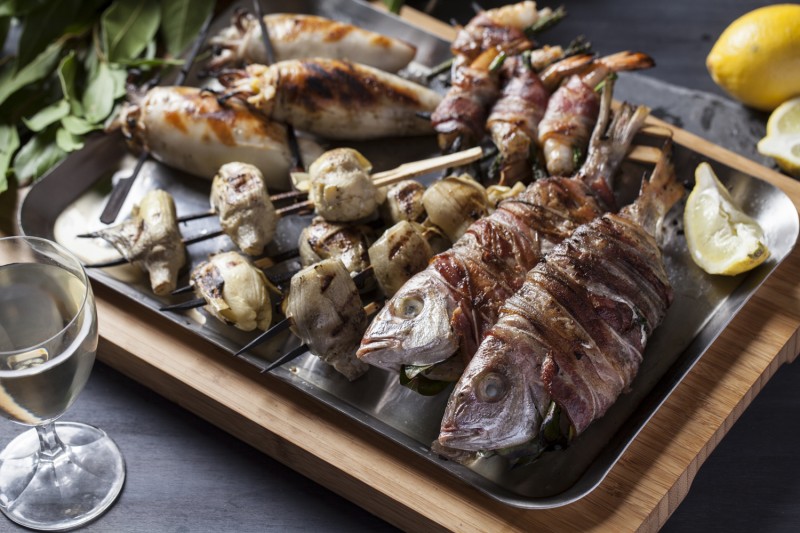 And there you have it! Serve everything at once with fresh lemon for squeezing. Click on the image to view our BBQXL bamboo chopping board and stainless steel tray. It makes a great serving tray, especially for fish and seafood! 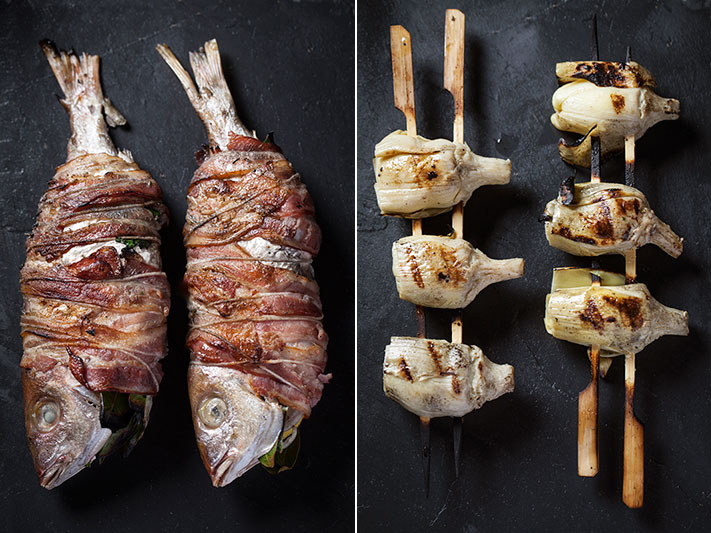 Grilled bream or snapper wrapped in bacon and grilled artichoke hearts. Click on the image to view our recipes. 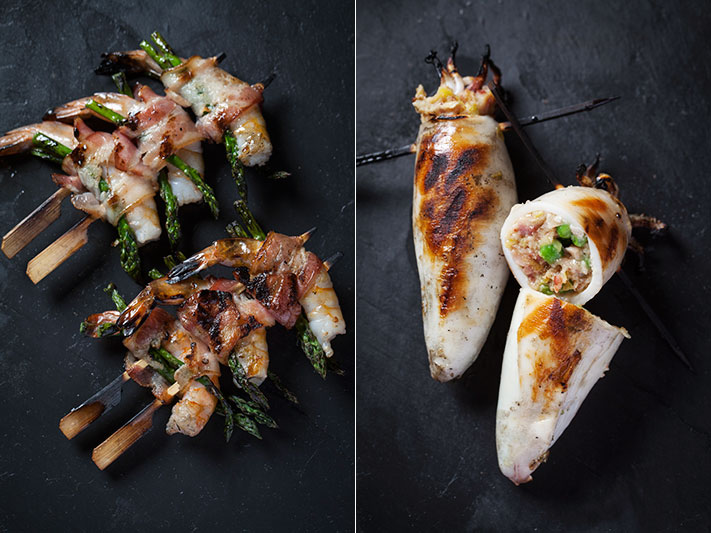 Grilled prawns wrapped in bacon and calamari stuffed with bacon, leek and green peas. Recipe? Simply click on the image!