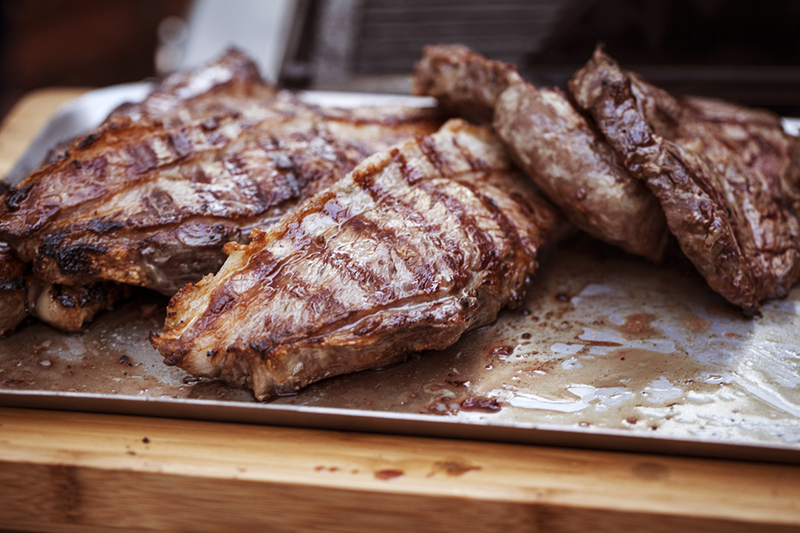 Australia is among the top three beef producers and exporters in the world along with Brazil and Argentina. Argentina however, is renowned for their high quality beef production and if you’ve never been privy to Argentine beef, make it a top priority! Don’t be surprised however, if you never go back to domestic!

Their beef is so flavourful and is actually rich in Omega 3 fatty acids, thus not contributing (greatly) to heightening our levels of cholesterol! I know this sounds odd, but because the majority of Argentine beef lives in huge, moist and very grassy pastures in the Pampa Humeda region of Aregntina, they ingest far more natural vegetation than other steer that are raised in feedlots and fed grain (a far less popular production method in Argentina). They are also not stressed by captivity, are not fed antibiotics nor loaded full of growth hormones, which is hugely beneficial for us. In fact, this model and its benefits have contributed to the organic meat industry.

Argentinians are one of the largest, if not the largest consumers of beef with an average consumption of 60 kilograms per person per year. To put this into perspective, Australians eat around half that, a mere 30 kilos! For this post, I wanted a true Argentinian Asado so I invited an Argentinian couple over that I met a few years ago and asked them to bring a few friends along with them. Well let me tell you, Argentine beef is awesome and if you’re vegetarian and ever invited to an Asado, “STEER” clear, you may not be able to resist!!! 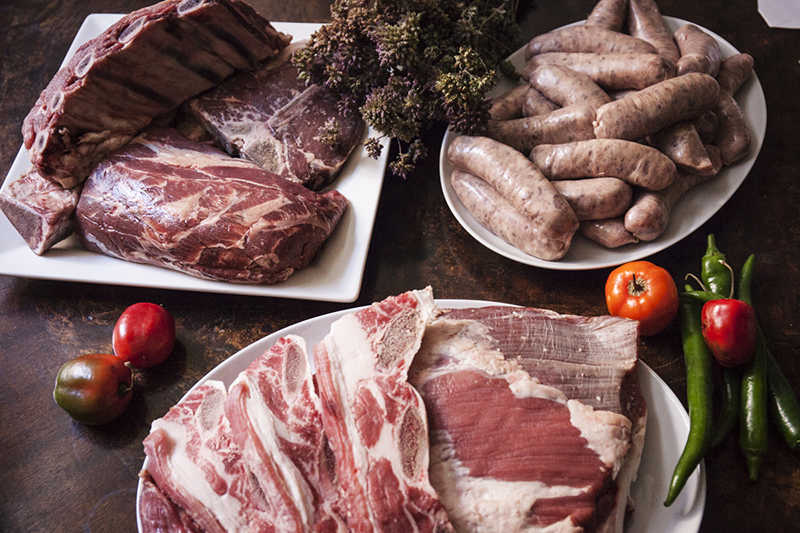 So here’s what you’ll need! BEEF, lots of it and Creole bangers, known as Chorizo Criollo, if you can find them. If not, any spicy sausage such as Italian will do, in my opinion.

The cuts are key to a good Argentinian Asado. They are not everyday standard cuts but you can find everything at a butcher that specialises in Argentine beef. If you can’t find Argentine beef, try looking for Australian beef that has been pasture raised and grass fed, like the Wagyu beef from Tasmania. The cuts are pictured below. We calculated about a kilo of beef per person, which sounds like a lot however, because the meat is only served with salads and bread, and because the Asado is served over a couple of hours, you have time to digest in between courses and continue! 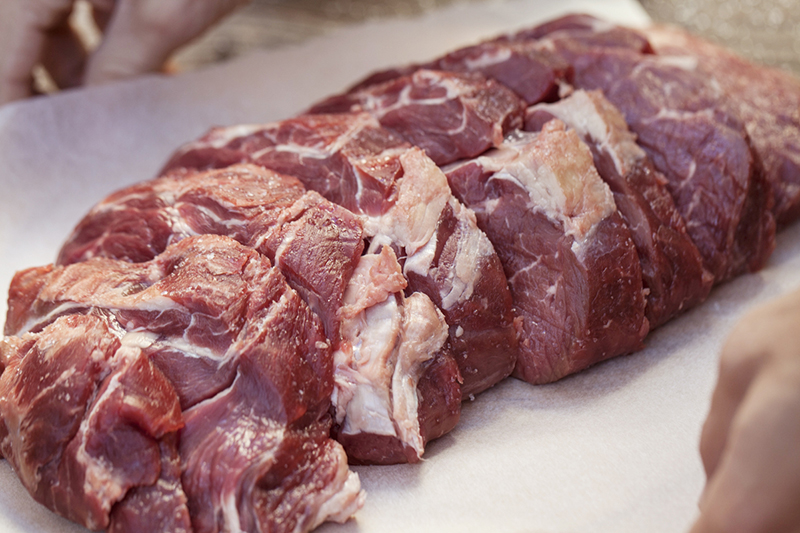 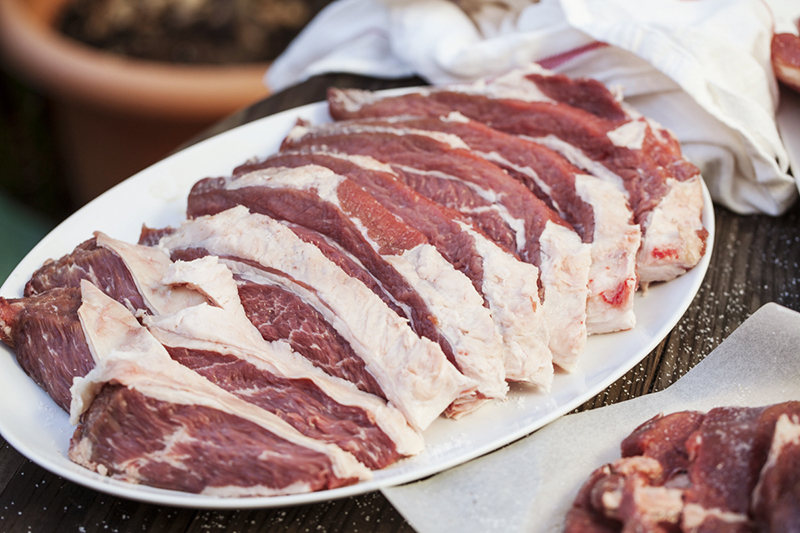 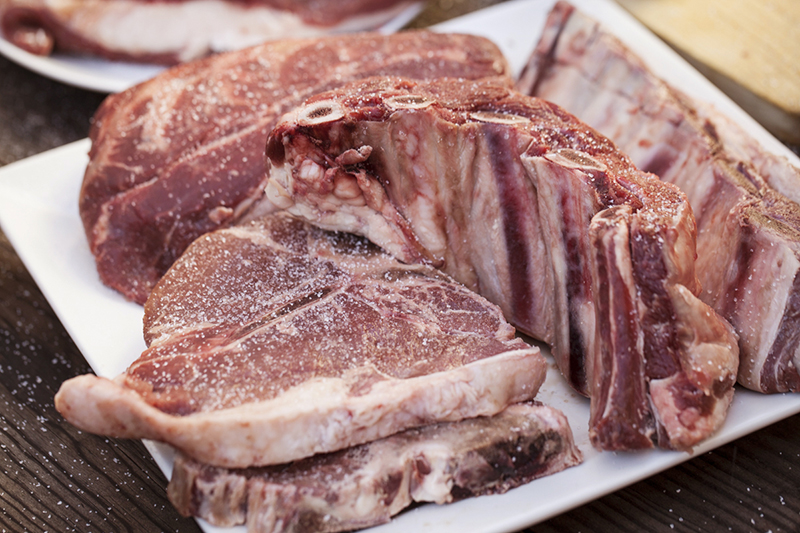 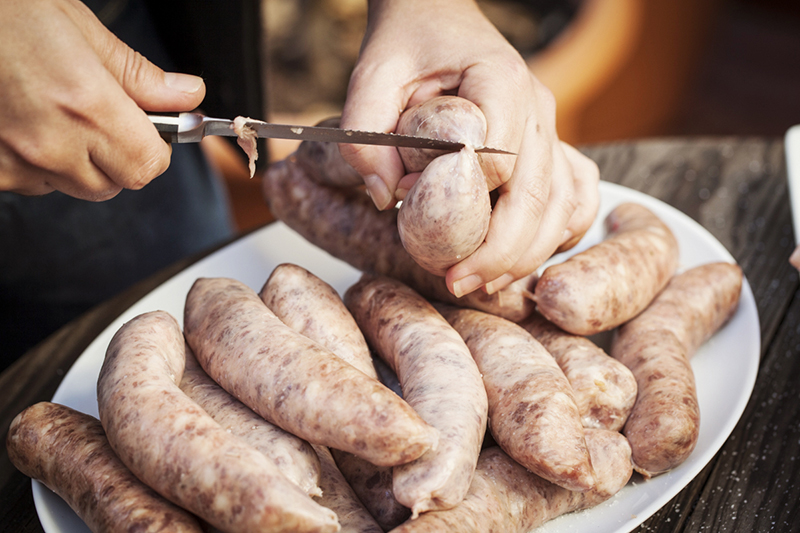 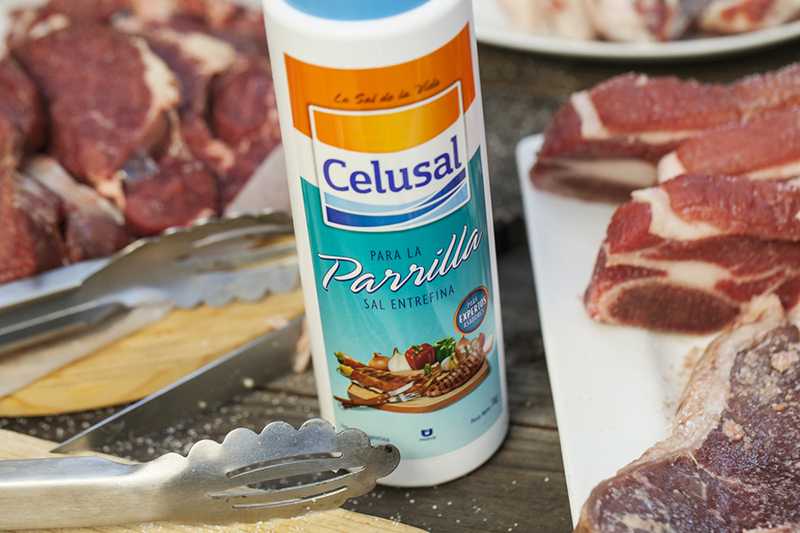 There is no marinating, seasoning or anything else like that. The salt however, is paramount because the meat is so flavourful on its own that that’s all you’ll need! In Argentina, they use coarse Argentine grill salt which my friends happened to bring over. It’s a great coarse salt that is neither too fine nor too coarse! If you can’t find it, use Murray River salt instead to mix things up a bit, and be very generous! 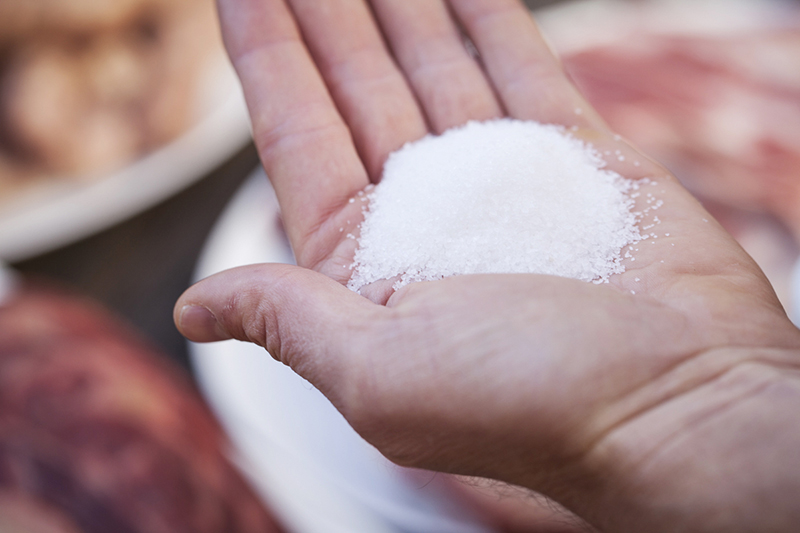 SALT! Like I say, don’t go sparingly, it’s the only seasoning you have. It needs to be applied right before you put the meat on the grill, not before because you’ll draw the juices out of the meat. 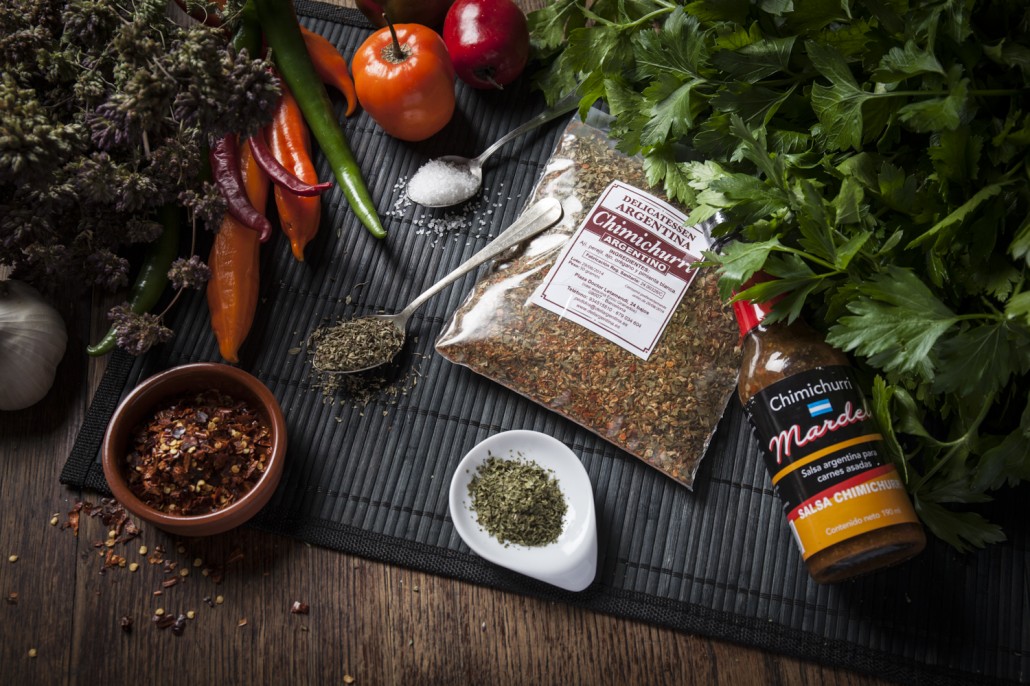 Before we move over to the grill, you need to know about Chimichurri! Chimichurri is a sauce that’s served with Agentinian Asado as an accompaniment to the grilled meat. It’s a mix of parsley, oregano, garlic, onion, salt, pepper, chili pepper, paprika, olive oil and a touch of red wine vinegar. It can be made fresh, , purchased in dried form and mixed with oil and vinegar or bottled, ready for use.

Let’s move over to the grill. In Argentina, Asado is only done over hardwood charcoal, usually the Quebracho variety. It’s a long, slow cooking process that starts hot and finishes off with indirect heat. The coals are eventually moved from directly under the meat to ensure that the drips don’t smoke up toward the food; which is not desirable in Asado. “You need to taste the true flavour of the meat” I’m told and rightly so! 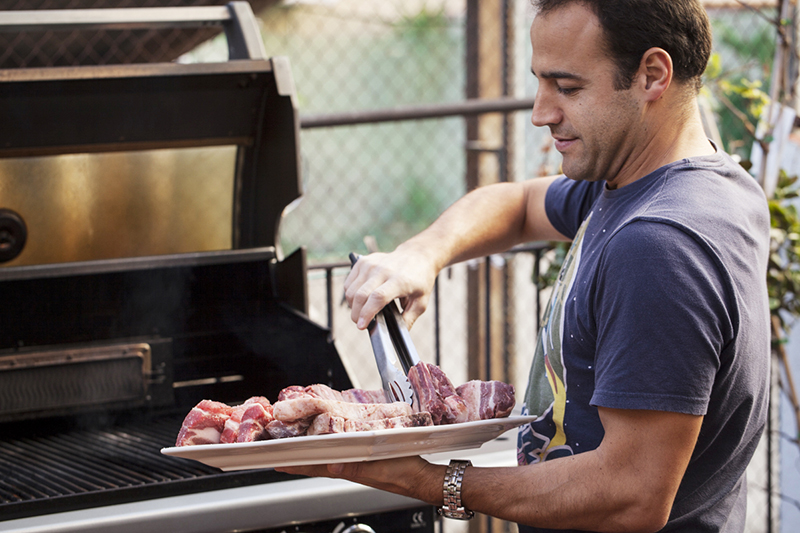 We used a gas grill here and the results were delicious. You can decide how you’d like to prepare it. Both methods are great! Click on the following link to view the BBQXL deluxe 4 pice tool set! 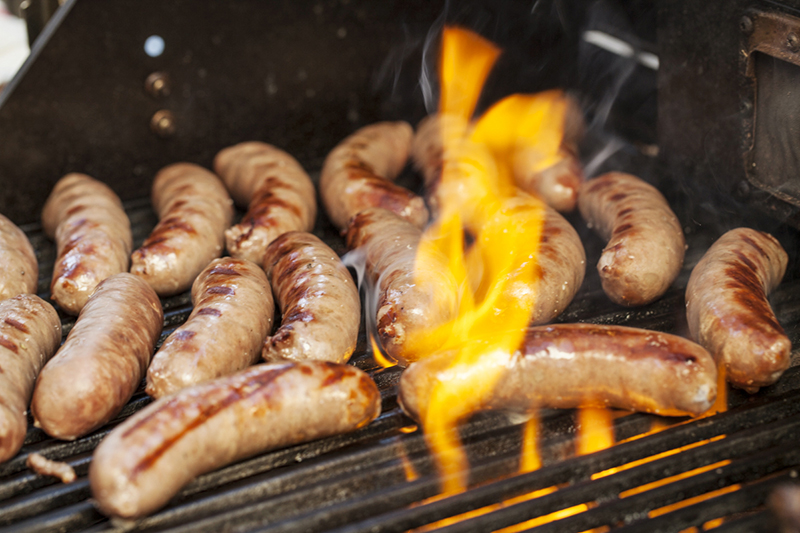 Start with the bangers… 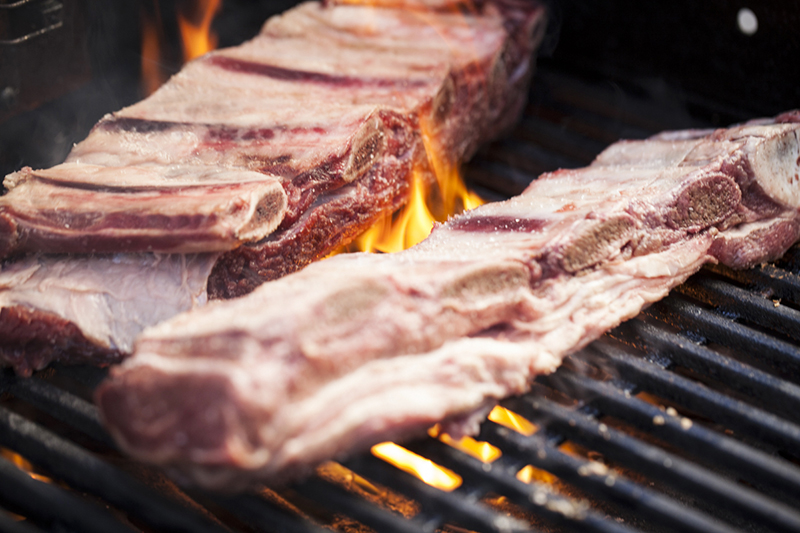 …and the thick short ribs. These are your starters believe it or not! 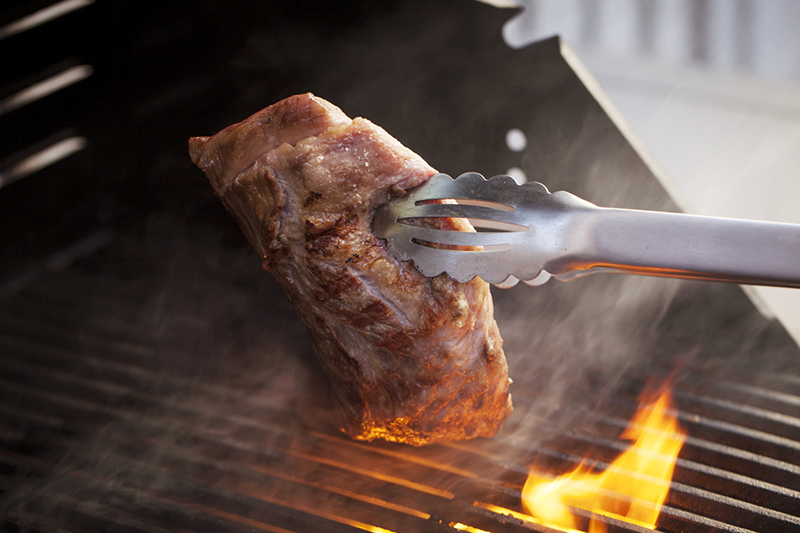 Start the ribs over high heat and allow flare-ups. You’re going for an even blackening on the ribs, when they’re charred, move them over and allow then to cook slowly over indirect heat for about an hour, turning them regularly. Rib meat can be tough so a long, slow cooking will ensure tender meat! 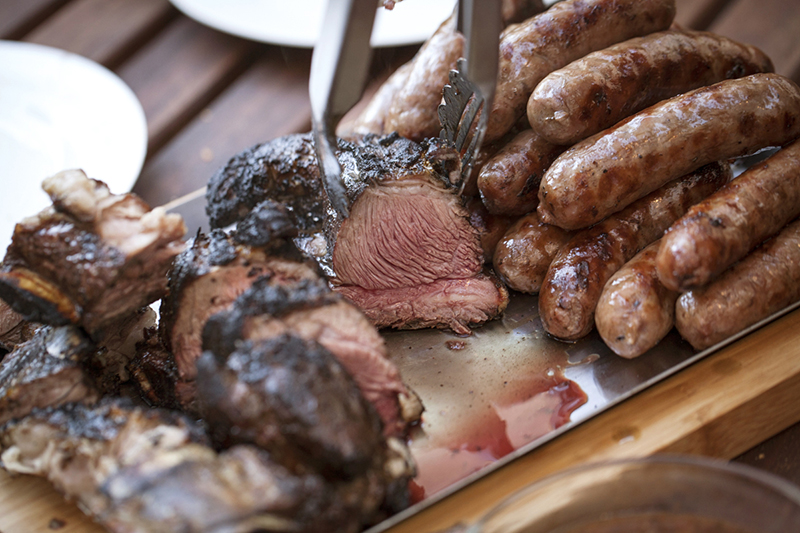 You’ll want a good char on the ribs and a medium-rare doneness. That’s why they get moved to indirect heat. Click on the following link to view the BBQXL bamboo chopping board and stainless steel tray! 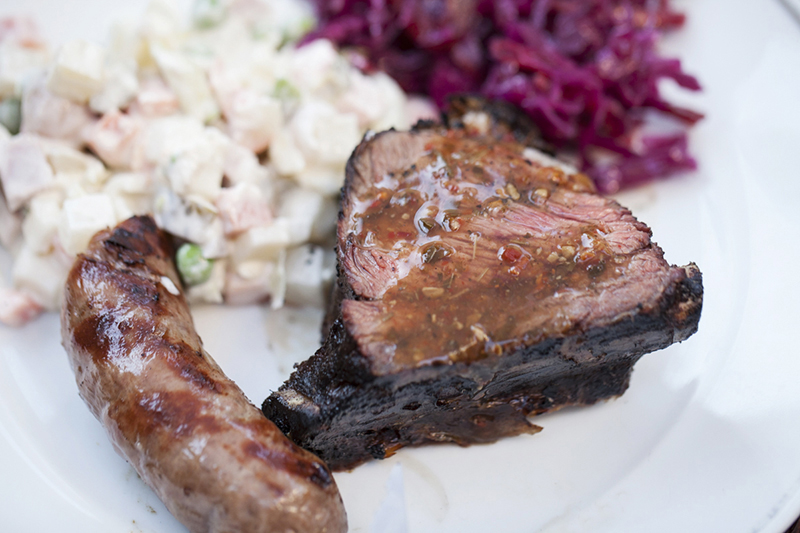 This is where the Chimichurri and salads come into play. 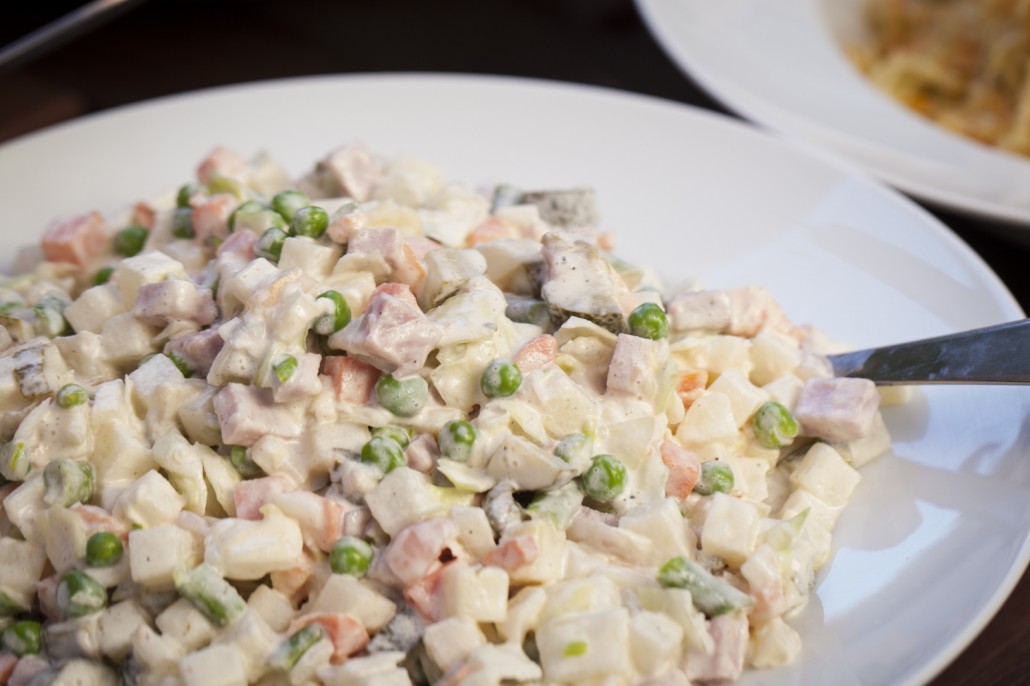 Salad Olivier, known as Ensalada Rusa in Argentina, is commonly served alongside Asado. It’s a mix on potatoes, ham (or tuna), peas, carrots and beans in a tangy mayonnaise dressing. Click HERE for the recipe!

I’m a firm believer in side dishes to accompany grilled meats. Coleslaws of any kind work here, for sure! As do lightly seasoned roasted red peppers and artichoke hearts. 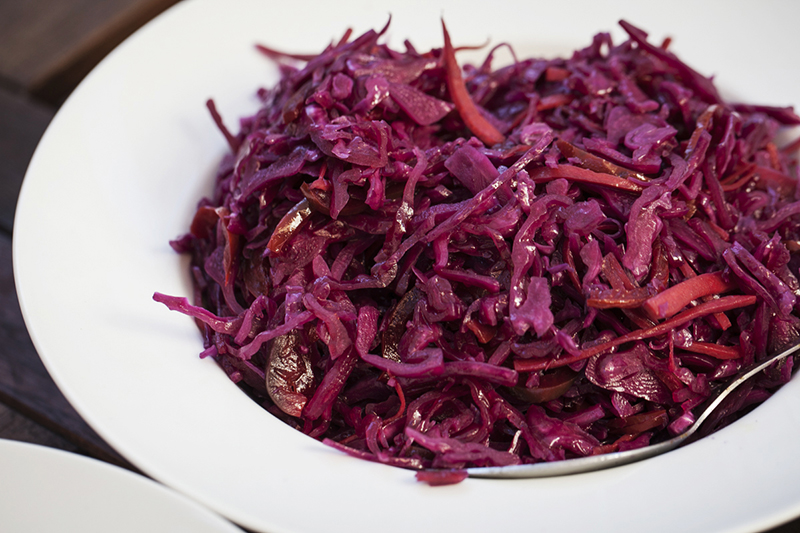 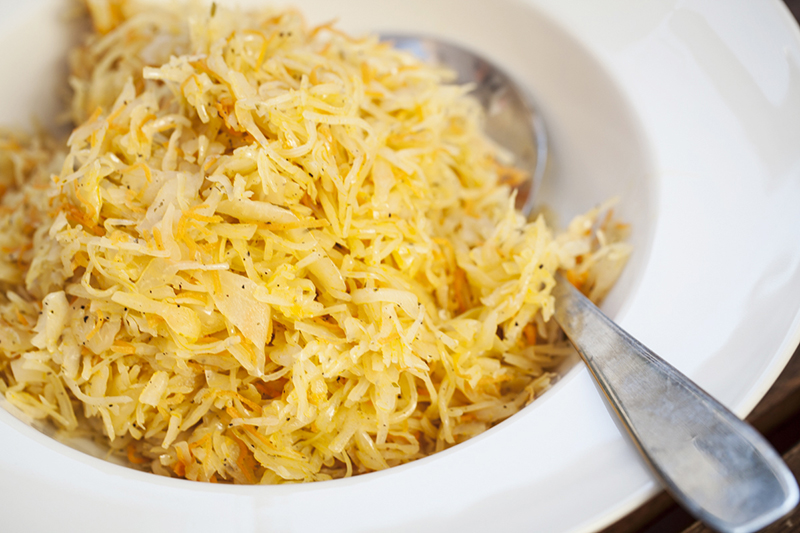 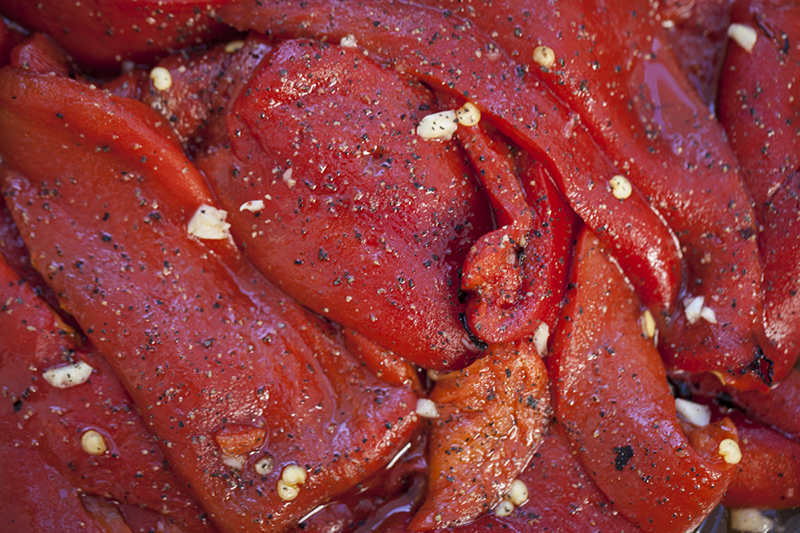 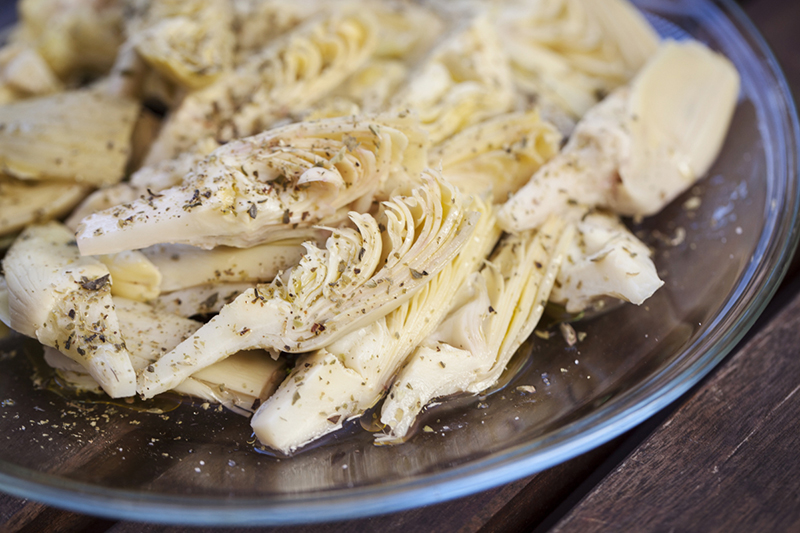 …and artichoke hearts with a light vinaigrette and oregano! 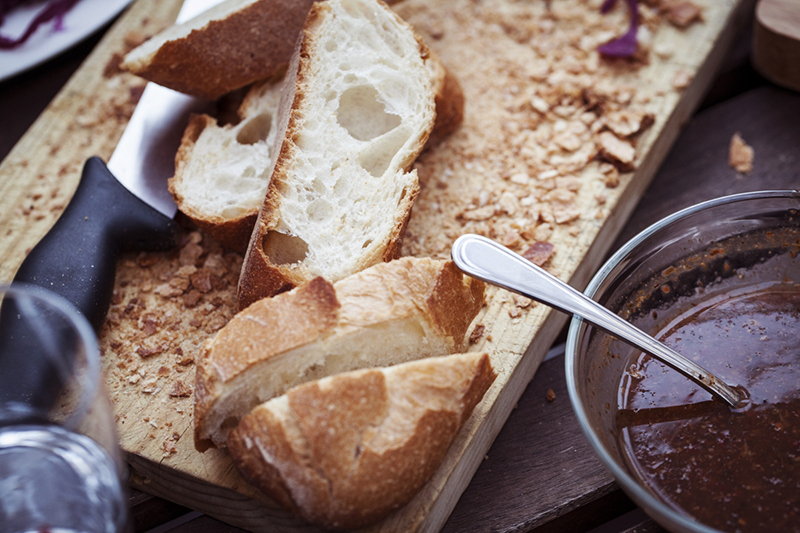 Sooooooooooooo! That’s the first round down! Now on to round two! The flank, the thinly sliced short ribs and the entrecôte! Don’t worry, it will all get eaten! 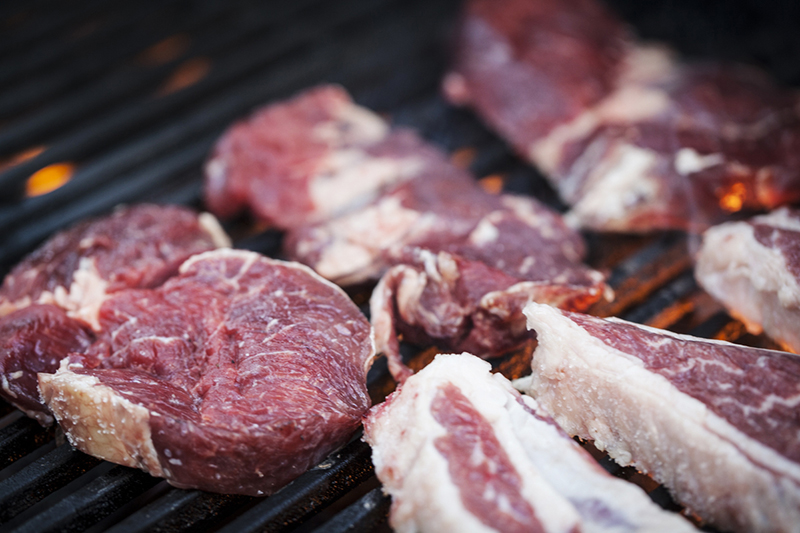 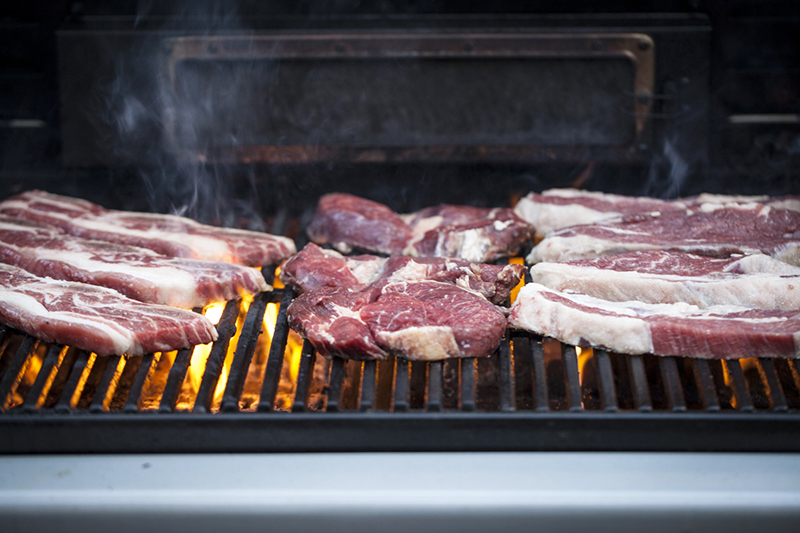 These cuts, even the thinly sliced ribs, can be cooked all at once. You’ll want a good sear so make sure your grill is very hot to ensure those beautiful grill lines! 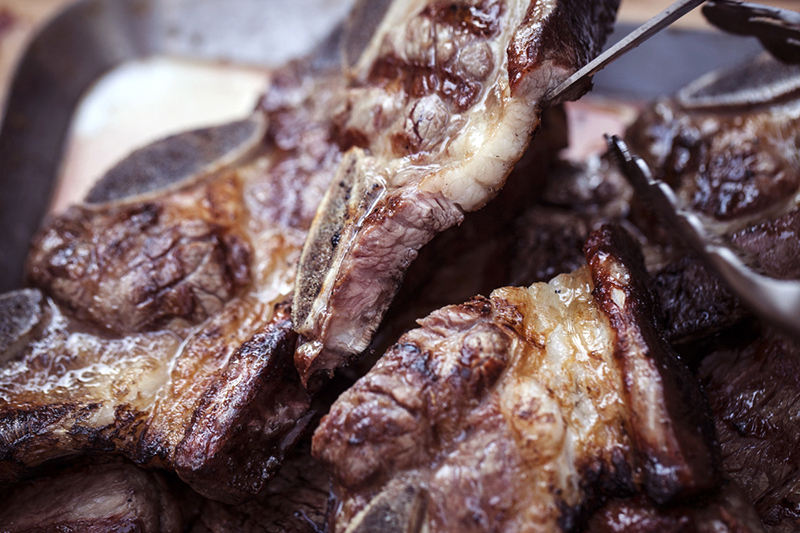 There you have it, perfect and delicious Argentinian Asado! 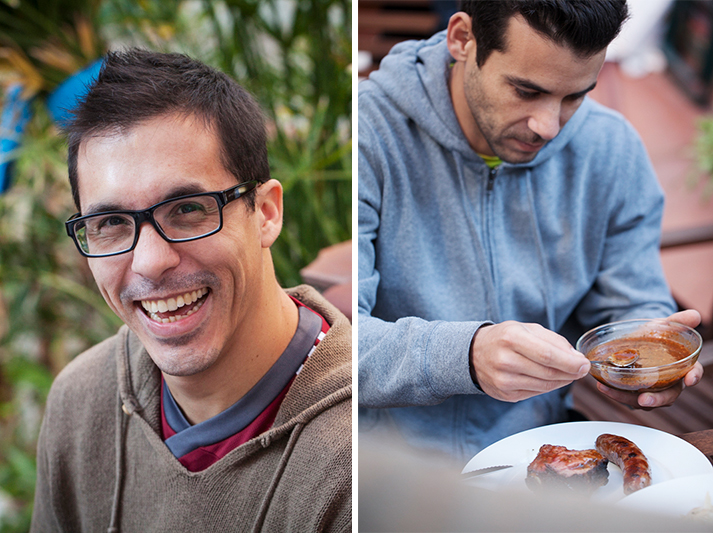 Your friends won’t forget it!